Tex Amanda (Brown) Meachem
I believe what my mother always told me, "Honey, you can do anything you want to do.
You just have to want to do it and go for it!"   WASP Tex Meachem 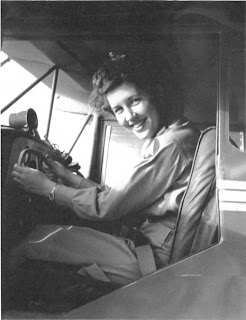 Tex Meachem took off on her final flight on July 5th in the care of Vitas Hospice of Florida at John Knox Village, in Pompano Beach, Florida. She was 94 years old.
Tex Amanda Brown, named after her grandmothers, “Texanna” and “Amanda,” was born in Tallahassee, Florida on Feb 4, 1918.  A few months later, the young family moved to Winter Garden, where Tex completed all her schooling, graduating as the Salutatorian from Lakeview High School.
After loosing her father to a heart attack when she was 16, Tex changed her college plans to be close to home, entering Florida State Collage for Women in Winter Garden.  She majored in Economics and worked at the State of Florida Department of Education.  She graduated with her degree and a teaching certificate and went to work full time for the State.
In 1939,  she was hired by the Dean of the Business Administration College at University of Florida. While working for the Dean, Tex signed up for the CPT program and learned to fly in order to cut her 2 hr. travel time to the beach. Soon after joining a flying club and getting her license, she volunteered to do the books for the Civil Air Patrol in Sarasota, Florida, in exchange for flying time.  Tex spent a year in Sarasota,  flying active duty, looking for submarines in the Gulf of Mexico.
While flying with the CAP,  Tex learned of the experimental women’s flying training program. She applied and was accepted into the class of 43-7 along with 101 other young women pilots. She paid her way to Avenger Field to join the training program.  Only 59 of the women graduated, earning their silver wings on November 13, 1943. 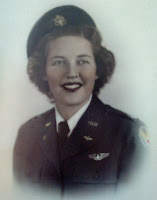 Tex was sent to Hondo Army Air Base as part of the  Training Command—Navigation school at Hondo, Texas.  There, her mission included flying C-45’s with navigation students plotting the courses and flying co-pilot on C-60’s.  While at Hondo, Tex fell in love with navigation instructor, John Meachem.  As she described their courtship: "We danced a thousand miles to 'Begin the Beguine'."
After five months at Hondo, she was transferred to the ferry command.  She traveled to Wilmington, Delaware, where she was kept busy, ferrying trainers to bases all over the US as well as flying salvage flights with war weary Piper Cubs.
After months of non-stop ferrying, Tex gave up flying to marry John Meachem, the man she described as 'the love of her life, on July 14, 1944.  After the war, they settled in Manilus, New York where  their growing family eventually included three daughters.

Once her third daughter started school, Tex enrolled in Syracuse University, where she earned a Masters in Library Science.  After graduating, she  worked as a high school librarian in the East Syracuse-Minoa School District until her retirement in the late 70s.  While in Manilus, Tex remained very active in the Christ Episcopal Church.

In 2001, Tex moved to John Knox Village in Pompano Beach, to be closer to her daughter. She was very active in her community, serving as a Resident Senator, and working on the Activities Committee and the Food Committee. She particularly enjoyed serving as a mentor to new residents when they first arrived at JKV, helping them to get acclimated, meet people, and discover the variety of activities available to them.

In March, 2010, when the WASP were awarded the Congressional Gold Medal, in recognition of their service to the country, Tex was present for all of the ceremonies.  A few weeks later she was given the opportunity to fly once again in an AT-6 Texan, which had been her favorite plane to fly as a WASP.

Tex is survived by two daughters, Margaret Josephine of Buffalo, NY, and Lucinda Brown (Sutton) of Coconut Creek, Florida, five grandchildren, and four great-grandchildren. Tex was preceded in death by her husband John in 1991 and youngest daughter, Melissa Donne (Corvez) , 1994.
Wings Across America was honored to interview Tex on May 3, 2003 in her Florida condo. It marked Wings Across America's  100th Interview.

What a joy to listen to Tex describe her colorful life, her love of flying and her love of living life to its fullest.  Although I remember the entire interview,  a few things stand out:
I also remember that she loved to laugh. 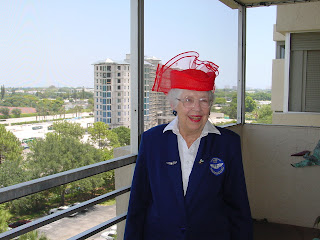 I took one final picture of Tex on her balcony, overlooking her beloved Florida landscape.  Here she is, just as I remember her, standing tall in her red hat, smiling.

The best thing I remember: Tex described a few miracles in her life as times when “God winked at me.”

He did indeed.  God bless her family and all of those who lives she touched.

Video clip of Tex's flight in an AT-6 thanks to JKV friends and History Flight of Marathon, Florida.

Posted by Wings Across America buglegirl at 6:41 PM No comments: