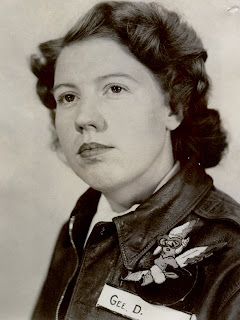 When she lived at The Wasps Nest in Miami after WWII she was "Gee" to all the little Reno children. We were in awe of her. She was like a warm wind at your back - sure and strong and big as all Texas.

Doris Gee passed away quietly on April 25, 2009 at a care facility in Shepherd, Texas. She was another of the wonderful WASP who so inspired others. When Janet Reno came to Texas to help dedicate the statue of the WASP at Avenger Field in 1996, she mentioned 'Gee' in her speech. Just listening, I was lifted by the words -- all inspired by a group of WASP who had touched her life as a young child. What a wonderful legacy Doris Gee has left--for all of us. A challenge to do your best, or better, because it is the right thing to do, and to never, ever do anything that would disappoint a WASP!

Although I never met Gee (I only talked to her on the phone once), I do remember her. I remember her excitement when I told her about the WASP Museum opening in 2005 and invited her to come. She was planning on it. She was excited something was happening in Texas to honor the WASP. Not long after that phone call, she had a stroke.

Like so many WASP, Doris Gee served quietly. Her name only appears briefly with a few dates and duty stations. As a member of WASP class 44-W-1, she entering training at Avenger Field, Sweetwater, Texas and graduated on February 11, 1944. It was very cold that day. From Avenger Field, Doris was sent to Pecos Army Air Base in Pecos, Texas, where she would have flown AT-6, UC-78 and AT-17B as an engineering test pilot, administrative pilot and transport pilot. She was then transferred to Yuma Army Air Field, Yuma, Arizona to the Flexible Gunnery School/Radar Observer School. Here, she would have flown B-26's, towing targets for gunners preparing for combat. Other missions at this base included co-pilot instruction, AT-11; BT-13.

The legacy of Doris Gee is the inspiration she gave to those she met. She lives on through those of us who have been touched and inspired by the WASP, for that is what she was, a WASP. WASP didn't just make history, they made inspirational history. May they continue to inspire us all.

Following reprinted from the Corsicana Sun:

Doris was born on June 13, 1921 in Rockdale to the late Ernest W. and Mabel C. (Cherry) Gee. She entered the U.S. Air Force in July of 1943 as a Womens AirForce Service Pilot (WASP), and served for 18 months during World War II.

She subsequently worked for Continental Airlines training pilots for several years. She retired as a Realtor in Idyllwild, Calif., and returned to live in her beloved Texas.

Doris is survived by her nephews, Travis L. Gee and wife Susan of Wisconsin and William E. Gee of Florida; niece, Gareth A. Downey of California; and dear friends, Jeff and Brenda Langham of Shepherd.
She was preceded in death by her parents; brother, Alfred T. Gee; and lifelong friend and companion, Mary Jane Langham.

Graveside services were held at 3 p.m. Sunday, May 3, at the Rice Cemetery with the Rev. Don Wills officiating.

Posted by Wings Across America buglegirl at 9:11 AM 3 comments: 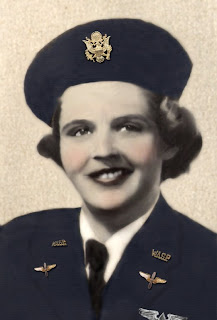 WASP Peggy Parker Eccles passed away on May 9, 2009, the day before Mother's Day. She had been diagnosed with a terminal illness, and was fighting the good fight. Our prayers go out to her family.
Peggy's story is posted below--in her own words.
I was born on February 16, 1921, in Oregon City, Oregon. My inspiration and love of flying came from my father, also a pilot. I was a junior at Mills College when I got my pilot license in 1941. The Civilian Pilot Training program (CPT), was offered at Mills College, in California's San Francisco Bay area. When I began college at 16, I intended to head for medical school. I also wanted to fly to get the feeling of the third dimension.
After I finished the CPT training during my senior year of college, I was interviewed after spring vacation, I was asked to become a WASP right away. I opted to wait until after I graduated from college in June of 1942. I passed the required physical, but somehow my papers got lost somewhere at Randolph Field, San Antonio, Texas. After inquiring about the delay, I got my orders to report to Sweetwater, Texas.
I was upon graduation, assigned to the Air Transport Command in Romulus, Michigan. I mostly ferried the B-24 anf B-17 to point of embarkations, which included Great Falls, Montanna, the San Francisco Bay area and Newark, New Jersey. I also flew several Norsemen to Montreal, Canda, which were crated and sent to England. Then I was sent to the Second Air Force Training Command, and assigned to a B-29 base near Alamogordo New Mexico, where I acted as a taxi service for four physicists at the University of New Mexico in Albuquerque. I would fly the men from New Mexico to Edwards Air Force Base in California, on to Washington, DC. The entire project was very hush-hush! I even had to carry a gun while I transported those men.
After deactivation, I continued in aviation one year with other WASP at the Palm Springs Airport in California for awhile. I also taught flying and continued to ferry planes. I married Julian Eccles. We have three children: Ted Eccles, Ralph Eccles and Jill Frodsham. All of whom presented me with seventeen grandchildren.
I continue to fly whenever I get the opportunity. I sold my Klamath Falls residence and now spend part of the year in Palm Desert, California, and part of the year at Lake of the Woods in Oregon, which I believe is the best of all worlds at this point.
_______________
Peggy's story reprinted from WASP Betty Turner's "Out of the Blue and Into History"
SEE PHOTOS OF PEGGY
More will be posted as information changes.
God bless you all,
nancy
Posted by Wings Across America buglegirl at 7:14 PM No comments: