Born Lelia Pearl Bragg on April 29, 1909 on Chestnut Mountain, Summers County, West Virginia, the former Fairbanks, Alaska resident took her last flight on Thanksgiving Day, November 22, 2012, at Richland Place nursing home in Nashville, Tenn. She was survived by her son, Nashville lawyer/college professor Lewis L. Laska. She was the last survivor of the eight children born at home to John W. And Lanie C. Bragg. She was a pioneer aviatrix and educator.

Pearl learned to fly in a Kinner Fleet bi-plane in 1933 and held a pilot’s certificate until she was 97. Prior to World War II, the federal government established the Civilian Flight Training Program, a back-door method to train pilots for military service. Because of its name, it had to allow participation of women and black men, both generally thought incapable of learning to fly in that era. Pearl was given the black students to instruct and each one she taught received his wings.

Pearl’s regular occupation was as a public school teacher from the age of 17 until her retirement in 1972. She was a W.A.S.P (Women Airforce Service Pilot) trainee during the war and was honorably discharged. She also served as a cryptologist at the Pentagon where she received the first message from Guadalcanal. 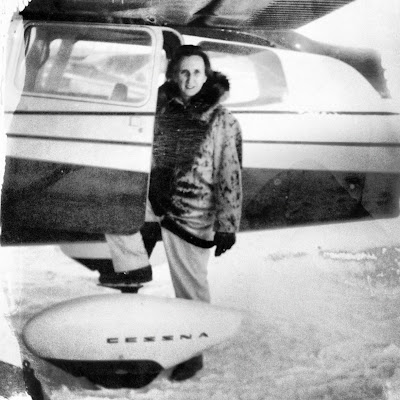 In 1945, following her dream to be a full-time pilot, Pearl moved to Nome, Alaska and worked as a flight instructor and bush pilot. The next year she became the first woman to solo a single-engine airplane (a 1939 Piper J4) up the Alaska Highway. The FAA recognized her achievements as a pioneer Alaska aviator in 2006. Scorning the belief that Alaska Natives (Eskimos, etc.) were unable to learn flying, she taught many, including Holger Jorgensen, who became the first Native hired as a pilot by a scheduled air line.

In 1946, Pearl married Lewis Lincoln Laska, a merchant and fur dealer in McGrath, Alaska. Their son was born the next year. Lew, from a pioneer family, died four months later at the age of 50. Pearl continued to operate her husband’s store and parka factory for another four years. She returned to teaching in Homer, and then Fairbanks, Alaska. She continued to teach flying on the side. Her ground-based hobby was sewing fur parkas, kuspuks and dolls. After several decades of summer school work, Pearl received an undergraduate degree from the University of Alaska in 1955. She received a master’s degree from Miami University of Ohio in 1959 and her thesis was a history of civilian aviation in Alaska. A sabbatical leave spent at George Peabody College (now a part of Vanderbilt University), Nashville, in 1963-64 qualified her as the first special education teacher in Fairbanks.

The proud owner of a 1947 model Cessna 140 (and, later a Cessna 150), she flew these planes to the Lower 48 on numerous occasions. She flew several times in the All Women’s Transcontinental Air Race ("Powder Puff Derby"). In later life she married a fellow school teacher, Ed Chamberlain, and they lived in California until his death in 1987. Thereafter, she drove her pickup to Fairbanks where she lived on her own, until she came to Nashville in 2007 to live with her son.

Gracious and even-tempered, Pearl allowed no nonsense when it came to flying, but asserted that every hour spent in the air gave a person an extra day on earth.

A life member of the 99's (the association of women pilots), she did not follow the cult of Amelia Earhart (ten years her senior) whom she met but did not know personally. "She got lost," was Pearl’s final assessment of "AE" whom she recognized as an important pathfinder in women’s aviation. The wearing of slacks was Amelia’s greatest contribution to women, insisted Pearl, who said it was just as easy to fly in a skirt as well. Pearl insisted that Jacqueline Cochran, a few years older than she, and Jerri Cobb, much younger, were the best women pilots of the era.

In addition to her son, Pearl is survived by daughter-in-law, Nancy Laska and granddaughter Jennava Laska, of Los Angeles, Calif. Condolences may be sent to 901 Church St., Nashville, TN 37203. At Pearl’s request, no services will be held. Her family gratefully acknowledges the tender care offered by the staff of Richland Place and Alive Hospice. Special thanks go to Lorenda Patterson and Kathleen Harding for the personal care they offered Pearl in the last five years as she lived in an apartment at her son’s law office.

Her family asks that any donations in her memory be made to the Baptist church of one’s choice or the National W.A.S.P. Museum at P.O. Box 456, Sweetwater, Texas 79556.
Posted by Wings Across America buglegirl at 10:10 AM 1 comment: