"My favorite word?  Oh, honor. That to me is more than a word.

That sounds melodramatic maybe, but, that’s how I feel." 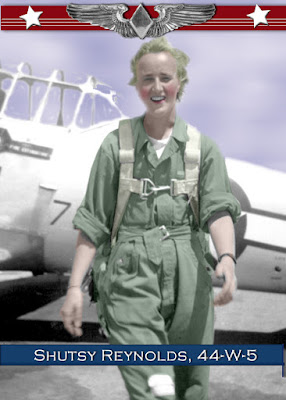 She gave the very best of herself and her talents to lift other people by sharing her message of honor, patriotism, friendship, kindness, generosity, and compassion.  The world may be a little less bright today, but her legacy lives on through all of us who loved her.  We will never, ever forget her.

Florence Genevieve Shutsy was born ninety-five years ago to John and Anna Shutsy in Connellsville, Pennsylvania. She was the youngest of four children (brothers A.J. and Irvin and sister, Eleanor). Eventually, the young family began raising poultry, and young Florence was given her first job: taking care of thousands of young chicks.

From her earliest memories, Shutsy dreamed of flying. Perhaps it was watching the mail plane pick up the mail by flying low over 2 poles to 'hook' the mail.  Once she saw that first airplane, she began making models (the kind you cut out with a razor blade).  Her collection grew to hundreds.

She loved to tell the story of her dad asking the kids what their dreams were, as they sat around the dinner table.  When he told her she was still a little too young, she replied, "I'm gonna learn how to fly!"  Laughter rang out.  Years later, she still smiled when she teased them, because she did what she said, and none of them could remember anything they said.

She saved up her pennies, bought Roscoe Turner's famous book on Aerobatics and studied it front to back.  She didn't understand it all, but she was learning, always learning, about flying.

She graduated High School in 1940 and began saving for college.  On December 7, 1941, the Japanese attacked Pearl Harbor.  Like all of America, the small town of Connellsville was deeply affected, as young men signed up to do their part.

"There was this surge of a patriotism…I mean I grew up learning….by the time I was 5 years old I learned how to salute. We all did.  We put the gold star out for my uncle that was killed in world war I…and we had the old uniform. We read the old letters.  I grew up on patriotism."

She immediately took a job in Pittsburgh and started business school.  Factories were desperate for workers, and her skills at computing payroll eventually landed her the job of head of the payroll department. She was only 19.

She saw an ad in the paper for the last class of non-college students for the government-run CPT (Civilian Pilot Training) program. "You had to be 18, so when I filled out the application and the medical doctor was filling it out, he said, you realize that you have to be 18 for this, and I said, Yes sir, I do."  Technically, she didn't actually lie, but she corrected the record as soon as she turned 18.

After completing ground school, Shutsy took the civilian pilot written test and scored in the top two.  The top five students had been promised a scholarship for flying lessons, but she was told, "There's a war on and you're a girl."   She began a letter-writing campaign and, eventually, was awarded the scholarship.

"By the time I got it, I was all by myself in this group.  I remember getting into this J-3 cub-- first time I’ve ever crawled into an airplane.  I thought it was gonna shake itself apart. I loved every minute of it!  My first flight was my first lesson.  I still have the logbook where he checked off my attitude, my coordination, my eagerness...I go thru it every now and then to see just how eager I was.  Eagerness was always a high mark."

After her solo, her sister, Eleanor, saved money to help pay for Shutsy's flying time. Every Sunday, her dad would go up with her.  Once she built up enough hours,  she applied for the Canadian Air Force and the Royal Air Force.  She was too young.  It was then that she learned about the women's training program in America.

Still too young to apply for the WASP, she began writing Jacqueline Cochran a letter every week, and every week, a letter would come in reply: "You're too young."  When she found out the WACS had lowered their age limit, she made sure Miss Cochran knew and, eventually, she received a telegram ordering her to report to Harrisburg for a physical. As she later recalled, "I was in 7th heaven!"

After the interview, physical and tests, she was accepted into class 44-W-5, paying her own way to travel to Sweetwater, Texas in December of 1943.  On June 27, 1944, Shutsy and 71 classmates completed seven months of Army Air Force flight training and graduated, earning their silver WASP wings. After graduation, Shutsy's orders sent her to Merced, California to the Basic Flying Training school, where she flight tested BT-13's and AT-6's.

"If airplanes underwent maintenance, especially overhauls, engine changes, or any major changes, they would have to be test flown before the male cadets could fly them.  That was my job as a WASP."

After the WASP were disbanded on Dec. 20, 1944, Shutsy became part of the Army Air Communication Service, the Air Rescue Service, the Weather Station and Army Technical Group out of the Anchorage and Alaska district.  She served as an instructor in Link Trainers. While in Alaska, she met her future husband, Lyle A. Reynolds.

On July 7, 1949, she joined the USAF Reserves as a 2nd Lieutenant.  Her first assignment was Langley Field, Virginia.  She was promoted to First Lieutenant and assigned to headquarters Air Reserve Center in Denver.  In November 1952, she married Lyle and they lived in the Panama Canal Zone for the next 16 years.  While in the Canal Zone, she was assigned to the USAF Reserves, Caribbean Air Command and was promoted to Captain in October 1956.  She resigned her commission in October of 1960.

During her time in Panama, Shutsy began to blossom as an artist and silversmith.  Together, the young couple began to enjoy lapidary.  By the time they left Panama, they had completed a specially commissioned coral and bloodstone heart for a fifteen foot cross for the Episcopal Church of Panama.

Lyle chose early retirement and the couple moved back to Connellsville following a serious illness and the death of her father.  They began a jewelry workshop as a hobby and eventually, turned it into a jewelry shop.  Following the death of her husband in 1988, Shutsy became more involved in the National WASP WWII Organization and volunteered to take charge of the WASP WWII Stores.

Shutsy spent the next 20+ years in her shop in Connellsville creating and reproducing beautiful silver wings and wing jewelry to help share the history of the WASP.   Her 3' x 12' airbrushed banners were each created especially for WASP and visitors to sign at airshows and aviation events across America. 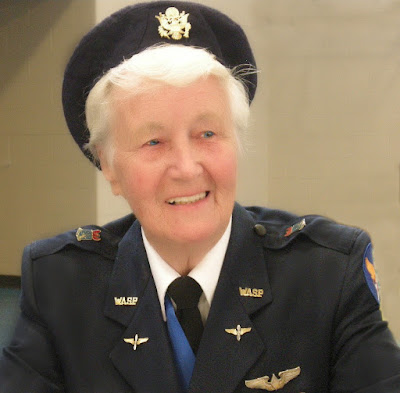 For her service to her country, Florence Shutsy Reynolds was awarded the

She was a proud member of the Daedalians and in 1999, she was inducted into the International Forest of Friendship.

She was elected Vice President of the National WASP WWII in 2004 and served until 2005, when she became acting President until 2006.  In 2007, the Commonwealth of Pennsylvania honored her for being the first female to earn her pilots license. In 2010, Shutsy and her fellow WASP were awarded the Congressional Gold Medal for their service to our country during World War II. (It is the highest honor our US Congress can bestow.)

In 2011, the Falcon Foundation nominated Shutsy for the Connellsville High Hall of Fame, and in 2016, The Connellsville Airport Terminal was renamed “Shutsy Reynolds Terminal”.

Shutsy was a member of St. Johns Church in Connellsville. She could hear the bells from her front door.

Along the way, Shutsy made many, many friends...never, ever met a stranger...and spread joy and boundless enthusiasm.  She did it with honor and integrity, with kindness and with courage through some pretty tough health challenges.

In lieu of flowers, please consider a donation in Shutsy’s memory to the Animal Protective League of Cleveland, where she rescued her beloved puppy, Cesar or to a charity of your choice.

Respectfully written by Nancy Parrish, with quotes from the Wings Across America's interview with Shutsy Reynolds.

If kindness, curiosity, humility, humor, generosity, persistence and honor could be rolled up into one person, it would be Shutsy Reynolds.  Those words are synonymous with the gentle, yet spunky lady pilot from Pennsylvania who blazed a trail and raised the bar.

She was my friend, our champion, our first supporter as we began Wings Across America. I could never repay her kindness, but I was excited to use her likeness and her quote on the walls of our "Flygirls of WWII" WASP Exhibit.  I designed it to be six feet tall because to me, all the WASP are larger than life.

I will miss her.  I will miss her encouraging voice and her unique, soft chuckle when she laughed.   But I am so grateful for the joy of knowing her and so honored to have called her my friend.  She still is.

I remember the old Indian legend her husband told her about.  When lightning strikes from the cloud to the ground, if you look quick, you might see what is waiting for you in eternity. For Shutsy, she was hoping for a Stearman with her name on it.  She added that she might want to renegotiate for an AT-6.

As a Jesus follower, I am certain my friend, Shutsy Reynolds, is flying high in whatever plane she chooses from her brand new hangar full of planes.

Fly high, my friend.  We are all better because we knew you.

God bless all of the those touched by this extraordinary woman.


Posted by Wings Across America buglegirl at 8:00 PM 8 comments: