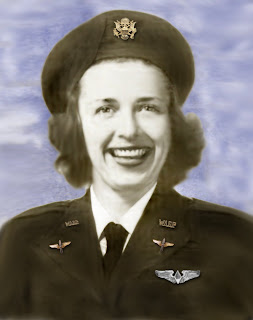 Dorothy was born in San Francisco, California on September 15, 1919.

As she grew up, she was intrigued with the possibility of learning to fly, so she learned to fly. When she learned about the flying training program at Avenger, which was teaching women pilots to fly military aircraft, she applied and was accepted into the program.

She spent seven months at Avenger, flying PT-17s, BT-13s and AT-6s. She graduated, received her silver WASP wings and was assigned to Merced Army Air Field, California, a training base for male cadets, as an engineering test pilot for AT-6 aircraft. This required flight testing any aircraft that had received major repairs (after an accident, a major overhaul or any changes in the structure of the airplane) before it could be flown again by an instructor or a student.

Following the deactivation of the WASP, Dorothy worked at the San Carlos Airport in California, ferrying aircraft.

She then went back to college and received her California Teaching Certificate and taught physical education in a high schoo from 1948 to 1953.

In 1952, she married engineer Howard Ritscher (who passed away in 1992). Dorothy has two daughters (Kathryn and Susan).

Today, she loves to play tennis, travel, garden, volunteer and play with her grandson, Cole —not necessarily in that order!

Dorothy attended the opening of the National WASP WWII Museum in 2007, and was one of 29 WASP to put their hands in cement. She passed away December 31, 2007.

Posted by Wings Across America buglegirl at 12:33 PM 1 comment: