“As a youngster, I was fascinated by the freedom
and excitement of flying”
WASP Katherine Willinger


Katherine Willinger was born in The Bronx, NYC, on July 12, 1919 and spent much of her life in the city she loved. 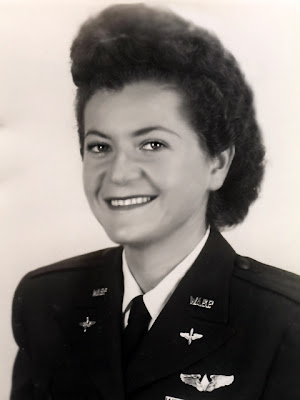 In 1943, she learned of the experimental flying training program for women pilots, applied, and became one of 108 young women who paid their way to Sweetwater, Texas to enter the training class of 44-W-8 to become Women Airforce Service Pilots.

After successfully completing over seven months of Army Air Force flight training, she and 48 classmates graduated in October of 1944 and received their silver WASP wings.  They were then stationed at different air fields and air bases across America.

Katherine was stationed at Goodfellow Field in San Angelo, Texas.  At Goodfellow she flew At-6’s, BT-13’s and PT-19’s as part of  the flight training given the aviation cadets stationed at the 2533rd Base Unit.

On 20 December 1944, the WASP were disbanded.     As Katherine later wrote, “After deactivation, I returned home, put flying behind me, and went into the world of business.”  She tackled her new challenges just as she had those as a WASP,  becoming the first woman president in the business of manufacturing photograph record albums.

Her client list included Angel Records, Capitol Records and Decca, among others.  She considered the work challenging,  as well as rewarding.   In 1970,  Katherine sold her company and traveled the world.

When she returned home,  she began designing and making hardwood furniture, eventually expanding her hobbies to include calligraphy, sculpting.  and stained glass.   She also took courses at Fordham University and the New School University In Liberal Arts.

Katherine suffered through several bouts with cancer (non-Hodgkins lymphoma in 1983, and colon cancer in 1992).  After overcoming those challenges,  she spent her last several decades enjoying the exciting lifestyle in Manhattan to the fullest.  She was a faithful supporter of the arts and was a regular at theatres, museums, concerts,  and operas around New York City.

In 2010, Katherine and her sister Women Airforce Service Pilots (WASP) were honored to receive the Congressional Gold Medal, the highest honor the Congress can award,  for their pioneering service as the first women in history to fly America’s military aircraft.

Katherine died in her beloved New York City on August 8, 2013.   She was predeceased by her parents, Max and Minnie (Weinstein) Willinger, brother Henry Willinger and sister Miriam Epstein (Julius).

God bless those whose lives she touched in so many wonderful ways.

“Out of the Blue and Into History,” by WASP Betty Turner, p. 479.
NYTimes Obituary

Posted by Wings Across America buglegirl at 1:05 PM 1 comment: