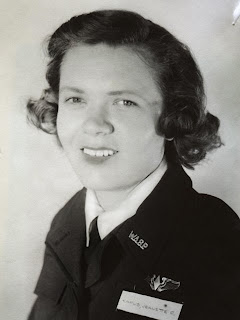 Jeannette "Jan" C. Kapus
Lt. Colonel, USAF/WASP WWII
January 14, 1920 - January 8, 2009
Jeannette was born on January 14, 1920 in Milwaukee, WI. to Viola and James Kapus. She attended Civilian Pilot Training courses at St. Ambrose College in Davenport, Iowa and took her flying lessons at Cram Field in Davenport.
During WWII, she applied and was accepted into the Army Air Force flight training program as a member of WASP Class 44-W-4. After completing training, she earned her silver WASP wings, graduating in May of 1944. She was assigned to Courtland Army Air Base, ALA, as an Engineering Test Pilot, testing BT-13's, ferrying PT-17's, PT-19's and BT-13's to boneyards and on occasion co-piloting the B-17 on maintenance runs. She also flew the AT-11, UC-78 and UC-64.
FROM HER OWN WORDS--P. 366, WASP Betty Turner's "OUT OF THE BLUE AND INTO HISTORY"
"After deactivation, I returned to Milwaukee and went into Civil Service, working at the Prisoner of War Camp at General Billy Mitchel Field, Milwaukee, Wisconsin, as Secretary to the Maintenance Officer. When the POW Camp was closed down, I worked in the Federal Building as Secretary to the Commander of the Wisconsin Intelligence Agency, which gathered data from our Wisconsin veterans for the Nuremberg Trials. This was followed by my assignment as Secretary to the Adjutant of Wisconsin Military District."
"I continued flying by attaining my instructor's rating and teaching flying nights and weekends at Curtiss-Wright Airport, now called Timmermann Airport in Milwaukee. At the request of AMVETS, at their airshow convention in Manitowoc, Wisconsin, I broke the record of spins by setting a new record of 64 spins that, as far as I know, hasn't been broken to date. This was witnessed and corrorborated by an FAA official and two AMVETS officials. I had gone on to break my own record unofficially by spinning a light aircraft 73 spins, at the South Shore Water Festival here in Milwaukee."
"In 1947, when the Army Air Force became the United States Air Force, I accepted a commission as 2nd Lt. and became active in the Reserves. In 1952, I applied for active duty. I served as Personnel Officer for 20 years, retiring on August 31, 1972, as a Lt. Colonel. My overseas assignments were: Prestwick, Scotland; Chaterous, France; and Perhawar, West Pakistan."
"After my retirement, I worked as a real estate person for eight years, then travel agent for five years. I have been working one day a week as a volunteer in the Retiree Activities Office, 440th Airlift Wing at General Billy Mitchell field here in Milwaukee, for 18 years. I work part-time as Secretary/Treasurer for the Wisconsin Military Retirees Alliance."
________
Jeannette retired in 1972 from Little Rock AF Base, AR. and returned to Wisconsin. She was a member of the past Chapter Commanders of Chapter 23, Reserve Officers Assn., Milwaukee Chapter of The Retired Officers Assn., and Milwaukee Chapter of the Military Order of World Wars, the past State Commander of The Retired Officers Assn. and the Military Order of World Wars. She was a member of the Billy Mitchell Chapter of the Air Force Assn. and American Legion Post #449.
Her WASP uniform is on display in the Wisconsin Veterans Museum in Madison, Wisconsin.
Jeannette has been mentioned in the publication "Wisconsin's Role in World War II" commemorating the 50th Anniversary of World War II, published by the Wisconsin Department of Veteran's Affairs. In 1981 she was the recipient of the Billiy Mitchell Award given by the Billy Mitchell Chapter, The Air Force Association in Milwaukee.
+++++++++++++++++++ 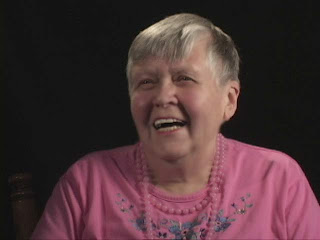 In July of 2001, we had the privilege of interviewing Jeannette for Wings Across America. Jeannette and my mom, WASP Deanie Parrish, were in the same flight of class 44-W-4. The bond between these 2 WASP was unmistakable and heartwarming. Jeannette's memories were so clear, and her laughter was contagious as she remembered that special time in her life.
Jeannette had recently been diagnosed with macular degeneration, and used an overhead projector and big screen to read. Thinking back on her quiet grace under what must have been great pressure, I'm still inspired. For her, it seemed to just be another challenge to overcome. She was determined not to let it get to her, and eventually, she attended blind school and graduated "WITH HONORS". When I called her to tell her about the "FLY GIRLS" exhibit, even though she knew she would never see it, she was excited to hear that WIMSA would be honoring the WASP. I'm grateful that I had a wonderful picture of her to include on the WASP filmstrip. It is a permanent part of the Fly Girls exhibit, wherever it may travel, but for now, it will be on the wall at WIMSA until November of 2009.
Jeannette was a true patriot with a gentle spirit and a sweet, sweet smile. Her deep faith and patriotism were an inspiration to everyone she met, and she will be missed by those touched by her kindness over her many years of service to her country and her community.
+++++++++++++++++++
Preceded in death by her loving brother, the late James F. (Shirley) Kapus, Jeannette is survived by her beloved nephew James D. (Sharon) Kapus; nieces Linda Barborich and Michael Olkowski and Nancy (Steve) Dodder. Great-aunt of Dan Barborich, Douglas Kapus, Charlotte (Lenny) Nesta, Tony (Nora) Burlo and Nick Burlo. Further survived by 1 great-great niece, 3 great-great nephews and her special friend Francis Buss.