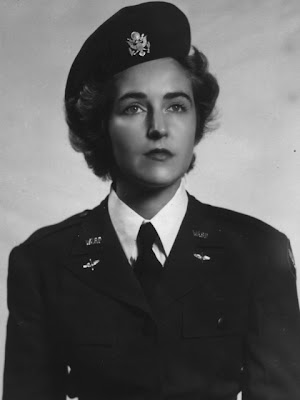 The following written by her son, William Tendo Leckie.


After a brief illness, Mom died early this morning, peacefully in her sleep, beneath the Harvest Moon, one of the many songs she sang (over and over!) to us as children.

Born in Akron, Ohio, she was studying English literature and French at Ohio State University during World War II when she decided she wanted to learn to fly. After earning her wings, she applied and was accepted to a very elite group of women pilots, The Women Airforce Service Pilots (WASP), and was among the first women to fly military aircraft for the United States. After graduating from training at Avenger Field, Sweetwater, Texas, on Dec. 7, 1944, June received Army Air Force orders to report to Perrin Field.  At Perrin, she was would have been assigned to fly Bt-13's, AT-6's and UC-78's.*    While at, June also became an instrument flight instructor for men returning from the front. "They were very young men with very old eyes."

First married to George Wolfe, she gave birth to my older brother, Drew, and soon hung up her scarf and goggles, and went to work in advertising and promotions at Lazarus Department store in Columbus, Ohio. Later divorced from George, "it was one of those war-time weddings," she reminisced fondly. "We loved each other, but it was never going to last," she became great friends with Roseann Leckie, guiding her through her wedding, and was thus introduced to my father, Bill. They were twin suns, Mom and Dad, and all five of us kids grew up amidst the often incomprehensible gravitational pull of two, very strong, unique people.

What a wonderful life we have all had, so very very rich. And to journey through to the end with both Dad and Mom is . . . a gift unmeasurable in its tenderness and in its mercy.

She has loved and been loved by so many, and by so many who have never known her but only that she was a woman who flew during the War. Along with us, they too elevate her to the status of hero. "But," she would laugh at the honorific, "I wasn't a hero. I was having a grand time, and doing what I loved to do."

Not until the WASP received the Congressional Gold Medal in 2010 (the highest honor we bestow on civilians, for the women were not commissioned but flew as civilians) and she met the women who now fly for their country and could see in their eyes her own status as hero to them, that she began to comprehend what it is to be a hero. No one wakes up in the morning and sets out to be heroic, "you do what you have to do when you have to do it, and the rest is what history says about it."

"The happiest time of my life was raising my children in Bluefield, West Virginia." And at her request, her ashes will be scattered on East River Mountain, a mountain she looked out on every day, and from which she drew great strength and great comfort.

How wonderful is this life! 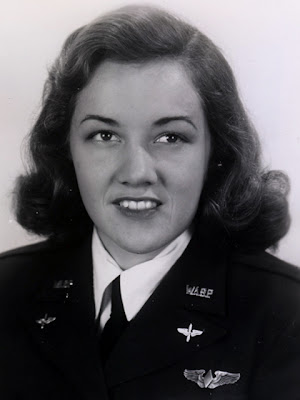 
Joan was born on October 1, 1924 in New York City; her family moved to Atlantic Beach, Long Island when she was five years old. Even at that early age, she was captivated by the concept of flight:

“As I sat in the sand at the beach, I watched the seagulls, how they spread their    wings and rode the air currents, and their landings on the water… I started        thinking how wonderful it would be up there with them in the sky looking down on Mother Earth and feeling the freedom of flight.”

Joan was fifteen when she started to fly and after high school she went to Hofstra College to complete ground school requirements.  At the age of 18 she was accepted into 44-W-7 along with her friends Mimi Keir and Bonnie Dorsey.   Ironically, all three friends ended up in 44-W-8.   Upon graduation from Army Air Forces Flight training at Avenger Field, Joan was stationed at Goodfellow Field in San Angelo, Texas, where she flight tested and ferried airplanes.

When the WASP disbanded, Joan continued to transport small airplanes that were being bought and sold after the war.  During that time, "My friend and flying buddy, Scotty Bradley, came home with me and never left.  She met my brother who had just come back from the Pacific and they were married.  That left me without my flying buddy.”


In the years that followed, Joan taught ballroom dancing at the Arthur Murray Dance Studio, and worked as an Account Executive at Rubin H Donnelly Company.  She married the love of her life, John L "Jack" Frost  and they raised their family in Pennsylvania., Joan continued  to be heavily involved with the WASPs during the 1970’s as they lobbyed Congress for recognition.  In addition, Joan worked tirelessly for a number of charities and and proudly received The Boy Scout Award from President Ronald Reagan.

Her three children survive Joan:  Lee-Ann, Stephen and Ginny.  Grandchildren: John, Daniel, Christopher and Michaela Frost, Meredith and Maddie Frost, and Jack, Carina and Brenna Corry.  Joan is also survived by her sister, Patricia Gough, and her sister-in-law, Scotty Gough, who resides in Maryland with daughters Connie and Joan Gough.

respectfully posted as written by Joan's daughter, Lee-Ann
Posted by Wings Across America buglegirl at 10:51 AM No comments: