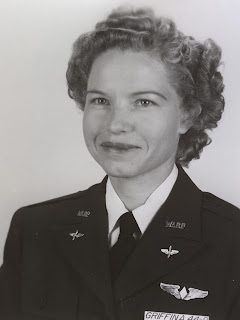 "When I was 10 years old, Charles Lindbergh flew solo across the Atlantic. He was my hero and model. Later on, Amelia Earhart showed me women could fly, too. When I was at the University of Connecticut, I saved all the money I could get for flying lessons. By the time the war broke out, I had graduated from the university and had my private flying license."
Ann Gleszer from WASP Betty Turner's "Out of the Blue and Into History"


Ann Griffin Gleszer was born to Frank and Catherine Golick of Columbia, Connecticut on  June 21, 1916.    She graduated from the University of Connecticut with a Master’s Degree in Education.  While attending college, she also took flying lessons and got her private pilot’s license, eventually becoming an air traffic controller at Rentschler Field in East Hartford.

When America entered World War II and the call went out for women pilots, Ann applied to the Army Air Forces women's training program at Avenger field, Texas, and was accepted into class 440-9.  After successfully completing seven months of flight training,  she graduated, received her WASP (Women Airforce Service Pilots) wings, and was stationed at Robbins Army Air Field in Macon, Georgia as an engineering test pilot in BT-13's and AT-6's.  Serving her country as a WASP influenced Ann for the rest of her life.

After the WASP were deactivated, Ann became a flight instructor and kept a plane at Simsbury airport. Later, as a test pilot for aeronautical engineer, businessman and inventor Charles Kaman in Bloomfield, she was featured flying a Kaman Aircraft K-125 helicopter in the November 15, 1948 issue of “Life” magazine.

Ann married Thomas Griffin (now deceased) and lived in Switzerland with their two sons, during which time she developed life-long friendships and became fluent in French. She began teaching French at Simsbury High School in the early 1960s and arranged many winter ski trips for students to Okemo Mountain.  She also taught French and Spanish at Newtown High School until her retirement in 1983.

Her husband of 42 years, Kenneth Gleszer, was a radio communication officer on Liberty ships in WWII, as well as a former non-military pilot and flight instructor.

In March, 2010, together with all her WASP peers, Ann received the Congressional Gold Medal, the highest honor the Congress of the United States can bestow on a civilian, honoring their service as WASP, the first women in history to fly American military aircraft.  during WWII.   She also received the Connecticut Veteran’s Wartime Service Medal from the Dept. of Veterans’ Affairs.

Ann was a member of the Methodist Church of Bethel and a life-long member of Eastern Star.

Pre-deceased by her parents, sisters Mary and Sophie, and brother, Bill, Ann is survived by her husband, Kenneth of Danbury, son Douglas Griffin and spouse Jill of Monroe; son Glenn Griffin and spouse Sandra, of Silver City, New Mexico, grandson Douglas II and spouse Stephanie of Bethel and many fond teachers, students, military, neighbors and friends in the U.S., Switzerland and Italy.

In lieu of flowers, please send donations to Masonicare Hospice or the Salvation Army.