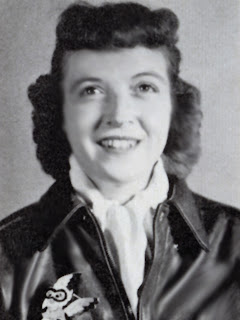 Born on January 15, 1917 in Everett, Washington, Enid Clifford was determined she would learn to fly.  Even as a small child, she kept telling her parents she wanted to learn.  They promised her she could take lessons after she graduated from high school.  Then, her parents decided that Enid should finish college first.

After graduating from Oregon State University,   while working as a model and hostess in the gown shop of a large department store in Portland, Enid answered an ad in the paper for a program sponsored by the U.S. government for a Civilian Pilot Training Program. She signed up for the program, going to ground school classes at night. She  borrowed her dad's car to get to the airport to earn her flying hours.

In October of 1941, Enid married Donald Moore Fisher.   Early in 1943, she learned of the Women Airforce Service Pilots program.  After her husband was deployed with the Navy Corps of Engineers, Enid applied for the training program and was accepted into class 43-6.

She paid her own way to travel to Sweetwater, Texas from Oregon, and, along with 83 other young women pilots,  graduated from training on October 9, 1943.  Her Army Air Force  orders sent her to Long Beach to the Ferry Command.  She was then transferred to St. Jo, Missouri for instrument training  then to Brownsville, Texas, where she completed transition training for the P-39, P-40, P-47 and P-51.  Her next assignment was to deliver P-51's from the west coast to the east coast.  After completing transition training for the P-63, she delivered P-63's from the plant in Buffalo, NY to Montana.

Once her husband returned to the states, the couple moved to Salem, Oregon in 1945 and started their family.  After completing her elementary teacher certification, Enid taught third and fourth grades for several years, and then, for the next ten years,  taught Spanish to sixth graders, traveling daily to 10 schools, three times a week.

From 1977 to 1998, Enid and her husband traveled extensively in the US, Canada and Europe.

(above posting taken from Enid's own words, published in Betty Turner's book, "Out of the Blue and Into History")


In 2005, Enid traveled back to Avenger Field in Sweetwater, Texas, where she had trained to become a WASP,  to attend the opening of the National WASP WWII Museum.  During the dedication ceremonies, each  of the  29 WASP present placed her handprints in cement, where they remain today as a testament to their devotion in service to their country during WWII.
Enid Fisher left her mark on many things during her lifetime, not the least of which are  the lives of all the children she taught.  Enid Fisher made a difference, as a wife, as a mother, as a teacher and as a patriot.
Our thoughts and prayers are with her family, her friends, and her WASP peers.
_______________


Enid was preceded in death by her husband, Donald.  She is survived by her only child, daughter Leslie Fisher Weaver and John Herbolsheimer, her companion for many years.
A service will be held on June 29th at 1:30pm at the Restlawn Cemetary in Salem, Oregon.  where Enid Fisher will receive full military honors, a final tribute to an American veteran.
________________