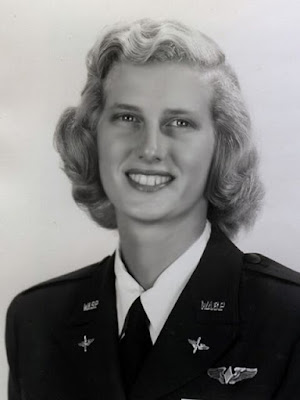 “It seemed to me that there were very clear issues in World War II, and I wanted to be part of it...to tell the truth, I really wanted to be a hero.”
WASP Carla Howard Horowitz

Carla Howard Horowitz was born May 28, 1922, in Chicago.  It was there she began her schooling until her second year of high school,  when she attended The Edgewood School, in Greenwich, Connecticut. This was a small co-ed boarding school (a shocking concept in 1936).

She returned to Chicago for her freshman college year at Northwestern University and then transferred for her next three years to the much smaller Carleton College in Northfield, Minnesota. (Gym was skiing from September through April.)

In her senior year, she joined the Civil Air Patrol, where she had some ground school, but never flew. When she graduated from college, she applied to the WASP, was accepted, and in March, 1944, traveled to Sweetwater to enroll in the class of 44W8. About half of her class washed out, so she felt very lucky to receive her silver wings in September 1944.

She was assigned to Blacklands Airforce Base in Waco, Texas, where she flew as an engineering test pilot until December 20th, 1944, when the WASP program was terminated. She felt the women were told, in effect, that there were now enough male pilots and they were no longer needed. It is noteworthy also that the women service pilots were paid less than the men.

After the WASP were deactivated, Carla moved to New York City where she worked in publishing for a number of years as assistant editor of Black Mask and Dime Detective, classic pulp publishers of Dashiell Hammett, Erle Stanley Gardner, etc. After that, she worked at Merrill Lynch, Pierce Fenner & Beane in the public relations department and later became a financial reporter for their publication Investor's Reader.

Carla married Milton Howard in 1947, and she and her husband adopted two children. She stayed home with son James and daughter Emily until 1965 when  Milton was diagnosed with cancer, and it became clear that she would have to earn a living. She went back to school, at Columbia University, earned an M.A. in remedial reading and then went into private practice. She sought further training in administrating and interpreting psychological tests and was a much sought-after psychoeducational evaluator as well as a remedial therapist.

Carla was known as a superb teacher of children with learning disabilities, making the practice of necessary skills enjoyable through a multitude of ingenious, self- invented games as well as through the very real pleasure she took in engaging with her students.   With intellect and heart in equal measure, little escaped her interest, curiosity, or ebullient enthusiasm, from the cultural offerings of her adopted New York City to the science and wonder of all aspects of the natural world.

In recent years, she shared an office with her psychoanalyst husband.  They both retired in 2006...she confessed that she loved to tell people she worked until she was 84. Her husband died in February 2011.

Her deepest affections were reserved for her family and many dear friends - love that was returned in spades. Carla is survived by a son, James, a daughter, Emily, and her 'darling grandson', Arlo Johnson. Life will not be the same without her.

She was asked many times why she joined the Airforce and became a pilot and her response was always along the lines of, “It seemed to me that there were very clear issues in World War II, and I wanted to be part of it...to tell the truth, I really wanted to be a hero.”

Respectfully, compiled from notes from Carla and official posting online.  Photo from Wings Across America.

Personal Note:  I always looked forward to hearing from Carla. Our email correspondence spanned 15 years.   Her emails were always gracious, kind, and encouraging.  Her gentle spirit lifted so many, including me, and I'm so grateful for her friendship.   She absolutely fulfilled her mission to be a hero.  The WASP not only paved the way for other women pilots who followed, they freed up male pilots to fly combat missions.  May God bless her family and all of those whose lives she touched.

Posted by Wings Across America buglegirl at 7:44 PM No comments: