"Don’t ever put limits on your dreams.   Dream farther and higher than you can imagine.   I would never have flown if I hadn’t looked to the sky and beyond." 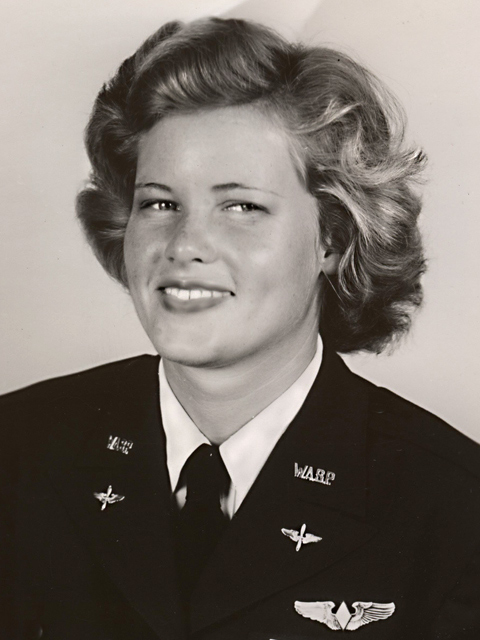 Scotty Bradley was born on October 28, 1922 in Los Angeles, California.  She lost her mother at an early age, so she and her two brothers were raised by their dad.

From the time she could remember, she said she wanted to fly.  Even before she was old enough to take lessons, she read everything she could on flying.  When she realized that pilots had to have good eyesight, she began eating carrots, one each day, which she did for the rest of her life.

After high school graduation,  she was chosen as one of ten finalists for a college scholarship. When interviewed, she was asked what she wanted to be,  and what courses she would take.  When she told the committe she wanted to be a pilot and take aeronautical engineering courses, the looks on their faces convinced her the scholarship was not going to happen.  So, she began working in a bank, earning $25 a week.  Her dad encouraged her to take part of her salary and follow her dream.  She did.

Scotty began taking ground school and flying lessons at Glendale Municipal Airport in Glendale, California.  It was after she had soloed and on an early  Sunday morning (December 7, 1941), while practicing landings,  that she was given a red light signal.  When she taxied to the hangar, she learned that Pearl Harbor had been attacked.  America was at war.   Immediately, all civilian flying within 200 miles of the coast was grounded.

In order to be able to continue flying, she commuted inland to Blythe, California, whose municipal airport was beyond the restricted coast line 'no-fly'  zone.   There she worked on the weekends with an ambulance corps that was teaching women to fly.  Once the Blythe Army Air Field became operational,  Scotty relocated closer to the base and worked in the base's control tower.  However,  she also continued to build up her flying time.

When Scotty heard about the WASP training program, she wrote to Jackie Cochran, the originator of the program and its director.  The reply was disappointing.  She was told that, although she had all the basic requirements,  she wasn’t old enough.  She then knew that she would have to wait a year before reapplying.

During that year, the owner of the local airport offered her free flying time if she would make parachute jumps, which would attract people to the airport.  Her instructions for her first jump came from the parachute rigger:  “When you jump out that door, you count to ten real slow, because I don’t want that parachute caught in the tail and ripped up.”   She made her first jump and continued jumping and building up her flying time until she was old enough to report to Avenger Field for WASP training.

Scotty paid her way to Sweetwater, Texas and, on February 11, 1944,  reported for training (together with ninety-seven other hopeful young women pilots) as a member of Class 44-W-7.    She was immediately chosen Squadron Commander.  This ‘honor’ meant she was responsible for marching the trainees everywhere, was last in line for the mess hall, and the first one out the door each morning in order to line up her classmates to march to their destination, be it the mess hall, flight line,  ground school, or calisthenics.

For the next seven months, she went through the Army Air Force’s training program, taking the same type classes and flying the same type airplanes as the AAF cadets were flying.   On September 8, 1944, Scotty and fifty-eight of her classmates graduated.  One final time, Scotty lined them up,  and they proudly marched onto the stage to receive their silver WASP wings.

After graduating,  she received her Army Air Force orders to  report to Williams Army Air Field in Mesa, Arizona, which was under the command of the West Coast Training Center.  While there, she was assigned to fly ferry missions in AT-6‘s.  She also flew as an engineering test pilot, making sure that damaged or red-lined planes had been repaired and were safe for the cadets and instructors to fly.

When the WASP were deactivated, she returned to California and flew sighteeing flights around southern California.  Eventually, she joined other WASP as part of a ferrying service, flying planes to civilian factories around the country and back to California.

In November of 1947, Scotty married Peter Gough, the brother of classmate Joan Frost Gough.  She continued flying until the young couple started their family.    Her last commercial flight as a pilot was the day Idlewild Airport became John F. Kennedy Airport.  Although she was seven months pregnant at the time, Scotty flew a Luscome as part of the opening day ceremonies.   With the arrival of each of their children:  Michael, Joan-Scott, Larry,  and Connie, she was a dedicated, full-time mom.

For many years, she shared her story as a WASP by traveling to Oshkosh, Wisconsin and speaking at EAA’s Air Venture. She was also a tireless volunteer in the WASP Stores at Oshkosh and at other air shows across the country. She was a frequent speaker at local events and schools and helped establish a WASP exhibit at the Air Mobility Command Museum at Dover Air Base.

How did Scotty feel about being a WASP?

“ I want you to know that all of us were just -- some people asked us, you know, why we did this-- why we flew.   It was an honor and a privilege for us to serve our country, doing what we loved best, and that was to fly. But to tell you the truth, and every WASP will agree with me on this:  if I had had the money at that time, I would have gladly paid them for that wonderful training and the opportunity to fly those wonderful airplanes.”

In 2010, Scotty and her sister WASP were awarded the Congressional Gold Medal for their outstanding service to our country during World War II.  At the ceremony, which was held in the Emancipation Hall of the United States Capitol, she was seated on the front row.

Scotty never lost her love of flying or of parachute jumping.  Always an outstanding athlete, she eventuallly added golf, tennis, bowling, gardening and cards to her passions, along with enthusiastically 'rooting' for her favorite team: the Maryland Terrapins.  She loved living near the beach, where she spent time walking and swimming.  Her many acts of kindness she kept to herself, but her family is just now beginning to learn the depth of her compassionate, loving spirit.

On May 22, Scotty quietly slipped away. Her two daughters were at her bedside.   Her latest hospital stay and battle with pneumonia had weakened her to the point that,  when she developed a bacterial infection, she wasn't able to overcome it.  Her one wish was to go back home, which she was able to do on May 21st.  Her family later learned that the day she died was also the birthday of her younger brother, who had been deceased for several years.

Scotty took her final flight  moments before a terrible rain storm arrived.  Her family is sure  she wanted to get beyond the clouds before they came in, as they lovingly  expressed it:  "She'd always look at the clouds and say how beautiful they were,  but she wouldn't want to be flying through them.”
“What we'll all remember and miss about mom was her ever present smile, her constant wave and greeting of:   "Hello,  Love",  and her usual farewell of:   "God Bless."

Scotty was preceeded in death by her husband, Peter W. Gough and her younger brother, William Bradley.  She is survived by her children Michael Peter Gough, Joan-Scott Gough, Laurence Bradley Gough and Constance Josephine Gough.  One grandchild, Heather Foster, USAF MD, is currently a flight doctor in Afghanistan.  She is also survived by her older brother Laurence Bradley and sisters-in-law Joan Bradley and Pat Gough, along with numerous nieces and nephews.

A memorial mass to celebrate Scotty's life will be held at St. Ann's Catholic Church in Bethany Beach, Delaware on June 25, 2013.

I first met Scotty at Oshkosh, where I was immediately captivated by her sweet spirit and gentle encouragement.  Her ‘Hello Love’ and ‘God bless you’ were always a part of every conversation.  Those words echo today, as I see her smiling face and sparkling eyes-- 20/20 vision from all those carrots!

Until her health prevented her, she was at every WASP function, including the opening of the Fly Girls Exhibit at the Women’s Memorial in 2008 and the Congressional Gold Medal Ceremony in 2010.  On both occasions, I still remember her sitting smack dab in the center of  the front row!   Scotty, as always, was smiling.

Posted by Wings Across America buglegirl at 11:30 AM 1 comment: