Vivian Cadman was just 9-years-old when her grandfather took her to the airshow at Mines Field near Los Angeles, but the experience ignited a passion for flying that would characterize the rest of her life.

A third generation Californian, Vivian was born in 1921 in Fullerton where she attended elementary school through junior college.  She transferred to the University of California, Berkeley where she majored in English.

At 19 Vivian was already licensed to fly airplanes – but didn’t yet have a license to drive an automobile.  In 1943 the shortage of male pilots for the World War II effort gave 22-year-old Vivian the shot of a lifetime.  She was one of only 1000, out of an applicant pool of 25,000+, tapped to join the elite Women Airforce Service Pilots (the WASP).  Her job was to ferry aircraft from the point of manufacture to locations where they were shipped overseas.  A qualified pursuit pilot, Vivian flew 17 different aircraft, including the P-51 “Mustang,” her favorite.

Vivian returned to civilian life when the WASP were unceremoniously disbanded.  As there were no jobs for professional women pilots at the time, she did what she had to to keep herself in the air: she became a stewardess for American Airlines.

Vivian Cadman married Lt. Howard B. Eddy, a naval aviator and former high schoolmate, in 1946.  Over the next twenty years tours of duty took the family to Washington, D.C.; Coronado; Alameda, CA; Pensacola, FL; Barber’s Point, HI; and Pt. Mugu, CA.  Three daughters were born along the way.  Vivian was the model Navy wife and mother: she ran the house when Howard was at sea, made all the girls’ – and her own – clothes, was active in the Navy Relief Society, and served as PTA president.  She also discovered golf, and played regularly from the late 50s to 2007.

Upon Howard’s retirement from the Navy in 1966, the family moved to the Seattle area where Vivian sold advertising for the weekly Mercer Island Reporter.  Along with bringing in the revenues needed to put the paper in the black, Vivian’s work won numerous prizes from the Washington Newspaper Association.

It was while living in the Seattle area that Vivian and Howard bought the first of a string of single-engine Piper aircraft and began taking trips across country and as far south as central Mexico.

In 1977, after years of intense lobbying in Washington, the WASP were recognized as veterans and granted benefits.  And in March 2010, Vivian and a few hundred of the remaining WASP traveled to Washington, D.C. to receive the United States Congressional Gold Medal, the highest award given to civilians.

Vivian Cadman Eddy was a thirty-four year resident of Coronado.  She passed away at her home on April 29, 2013.  She was 91.  Her remains were interred with military honors at Fort Rosecrans National Cemetery on May 25, 2013.  She is survived by her husband of 67 years, Cdr. Howard B. Eddy, USN, Retired; daughters Jo Anne Scott (husband Jim Scott), Lynn Eddy-Zambrano (husband Victor Zambrano) and Lis Eddy (husband Allan Whitcomb), five grandchildren and five great-grandchildren.

Posted by Wings Across America buglegirl at 8:07 AM 4 comments:

"I thought it (WASP) was a tremendous program.  As I look back, I'm amazed at the efficiency with which it was carried out.  It was well done.  I didn't know enough about aviation back then to criticize, but now I think to myself how great that was!
/s/ Esther Noffke, 44-W-2


Esther Emma Rose Noffke was a pioneering lady pilot
with a lifetime love of aviation-- from her earliest memories of watching airplanes overhead, to dreaming of flying, to flying for her country as a WASP,
and to helping grow a small flying field into a successful corporate airport. 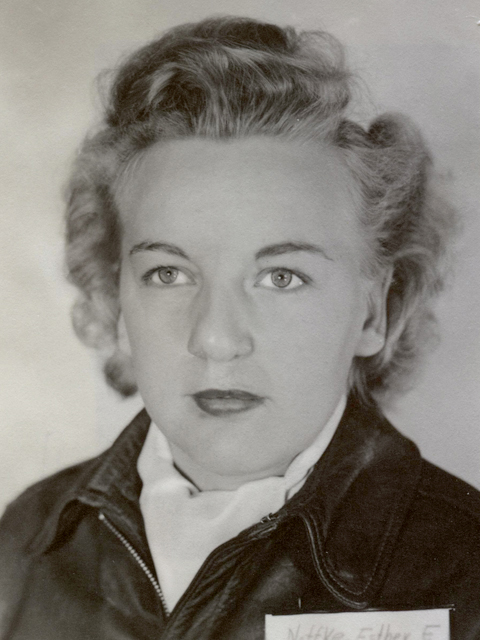 Esther was born March 16, 1922 in Bonfield, IL. to Edward and Henerrita Noffke.   While growing up on her family's farm in the central Illinois town of Union Hill,  young Esther  would watch the airplanes flying overhead and dream about flying.

During  her high school years, Esther skipped lunch, pocketing the money until she had saved enough to pay for flying lessons at Koerner's Airport near Kankakee, Illinois.  After graduating from Reddick High School, she continued building up her flying hours.   Eventually, she learned of a new pilot training program,  to teach qualified women pilots to fly military aircraft, and applied.

After being accepted into the program, Esther paid her way to travel to West Texas and arrived in Sweetwater, Texas  as one of the 112 members of class 44-2.    After completing seven months of Army Air Force flight training, Esther and forty-eight of her classmates had earned their silver WASP wings.  On March 13, 1944, they graduated and became WASP.

The Class 44-2 graduates were the first WASP to wear the brand new Santiago blue uniforms.   The Big Springs Bombardier School Band passed in review as the graduates, General Hap Arnold, (the Commanding General of the Army Air Forces), WASP Director Jacqueline Cochran,  and Nancy Love  (the Executive for WASP ATC/FD)  looked on.

After graduation, Esther received her Army orders to report to the Commanding Officer at Dodge City Army Air Base,  Kansas, where she completed the B-26 transition flight training program.   As she later recalled, "I couldn't believe I got that assignment!  They had already made the selection of the twenty pilots who would go to Dodge City and I couldn't qualify because I was half an inch too short.  We had the option of putting down three choices, and I put down B-26 school for all three, so I finally got to go.  I made it through and graduated, but, you know, it was tough.  It was hard."

Her next assignment was to Gowen Army Air Base in Boise, Idaho.   At Gowen, B-26’s flew alongside B-17’s, challenging the integrity of the formations and  training the B-17 pilots for combat.  From Gowen,  Esther was assigned to Dyersburg Army Air Field in Tennessee, where she flew tracking missions and as co-pilot in the B-17.

After the WASP were disbanded in December of 1944, Esther paid her way home and, when she coudn't find a job as a pilot, went to work in the shop at Pal Waukee Airport.  Eventually, she was hired as a flight instructor, where she taught all the ground school classes and did the Link training. Eventually, George Priestess (her boss)  bought the air field, and Esther was hired as his Administrative Assistant.  She became an important part of the team as they developed the Palwaukee Airport (now called Chicago Executive Airport).

In 1977 Esther was elected to the Illinois Aviation Hall of Fame.

She was a member of the Ninety-Nines (an international organization of women pilots) and was inducted into the International Forest of Friendship in 1987.    From 1970 -72 she served on the Woman's Advisory Committee On Aviation under President Lyndon Johnson.


In the early 1990's Esther agreed to be interviewed by her WASP classmate for a book she was writing about their class.  Esther only had one request: "I just don't want us to sound frivolous. We weren't frivolous; we were really serious."

On March 10, 2010, the  WASP were awarded the Congressional Gold Medal (the highest civilian award Congress can bestow).  Esther attended the Gold Medal Ceremony, which was held  in the Capitol of the United States.  She was accompanied by George Priester’s son, Charlie Priester, Chairman of Priester Aviation, together with other friends and family.

On Friday, June 28, 2013, at the Glenbrook Hostpital in Glenview, Illinois, Esther passed away after suffering a stroke.

On the day of her funeral,  Chicago Executive Airport, a busy airport near Chicago O'Hare Airport, shut down for an  hour in her honor so the funeral procession could pass down the taxiway, runway and around the control tower.  Two fire trucks extended their ladders and draped an American flag between them. As the procession drove under the flag,  a single bagpiper played Amazing Grace.  An American Flag covered  Esther’s coffin and,  as taps were played, the Air Force Honor Guard gently folded the flag.

Esther is survived by her sister,  Hilda Schultz;  brother,  Edward (Maggie) Noffke,  and many nieces, nephews and friends.

Esther was preceded in death by her parents, Edward and Henerrita Noffke,  and her sisters,  Alma Berberovich and Mildred Reiniche.

Memorials to remember this aviation pioneer may be made to the Esther Noffke Aviation Scholarship Fund at Southern Illinois University.

I never had the honor of meeting this extraordinary aviation pioneer.  Like so many of the WASP, after the war was over,  she went home, lived her life and made a difference.

In her honor, I posted a 'compiliation photo' -- made from a black and white photo of the Pal-Waukee Airport--and of Esther, from her trip to the Congressional Gold Medal Ceremony in Washington, DC.  It was a special day in the life of this special lady pilot.

God bless all of those whose lives she touched.

Posted by Wings Across America buglegirl at 12:56 PM 2 comments: