“We all did what they asked us to do… We were just happy doing what we were doing. It was a rarity. We were thrilled to be a part of it.   It was our war, our country and we were able to help.”  /s/Marguerite Sis Tuffin Bernhardt, 44-W-3 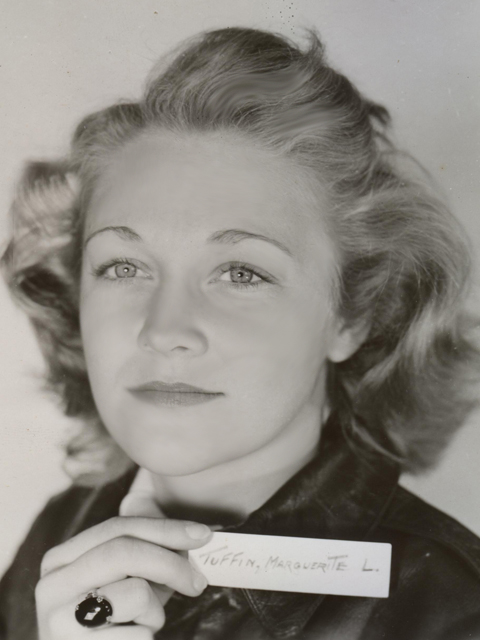 WASP Marguerite Tuffin Bernhardt was born in Hartford,  Connecticut on May 27, 1919 to a bookkeeper dad and part-time schoolteacher mom.  She fell in love with flying as a young girl.  At age thirteen, she built her first model airplane with balsa wood, glue,  and tissue paper.

At age sixteen , Marguerite  applied for a ground school program for boys who wanted to learn how to fly.  Although the school didn’t actually teach flying, her classes were in Physics Of Flight, Navigation and Airplane Engines.  She was the only girl in a class of thirty.  When asked how the boys felt about having a female classmate, she later said, "Some of the boys didn't take to it, but I didn't care.  The course was three or four months,  and only two boys and I finished it."
After graduating from high school, Marguerite worked as a clerk with an insurance company and, every two weeks, she was able to take one week’s salary and pay for a flying lesson. "I didn't always get my lesson. They would take men first. So I’d say, 'OK, I'll wait’,  but just doing it, just being up there. I wasn't disappointed."
In order to keep flying and learn more about airplanes, Marguerite took a job working on airplane electrical systems at Bradley Field, Connecticut. While there, her mother told her about the military training program for women pilots.   She applied and, after completing the personal interview, tests,  and Army physical, she was accepted as a member of class 44-W-3.
Marguerite  paid her way from Conneticut to Sweetwater, Texas,  which was not an easy trip during World War II.   Of the 100 young women pilots who entered her training class, she was one of only fifty-seven who graduated.  On April 14, 1944, Marguerite proudly donned her Santiago Blue uniform and received her silver WASP wings.
After graduation, she was assigned to Perrin Army Air Base in Sherman, Texas, where she flew AT-6’s, AT-17’s and BT-13’s.  While at Perrin, she was given a temporary assignment to Bryan Army Air Base in Bryan, Texas.
While stationed at Bryan, Marguerite completed Instrument Instructor’s School and received her Green Instrument Card, qualifying her to instruct on instruments and to make decisions about fly/don’t fly when the weather called for instrument flying.  She instructed Army Air Force cadets in instrument flying until the WASP were disbanded on December 20, 1944.
She then returned to her home in Connecticut and married.  Eventually,  the couple had one son, Robin.
Marguerite was living in the Ocala, Florida area when the news about the WASP being awarded the Congressional Gold Medal, the highest honour our nation can award a civilian, was first released.   Although she was not able to travel to Washington, she instantly became a local celebrity with the aviation community and the local newspapers.  In May, 2010, she was awarded her replica Congressional Gold Medal by Congressman Cliff Stearns.
Over the last several years, Marguerite found joy in attending local air shows and other aviation related events, making new friends and sharing her story with a new generation of Americans.
Friend Connie McConnell shared her thoughts about Marguerite:
“What a privilege to know such a wonderful lady.   My husband said she was the best of the best. She was just one of a kind. She was feisty and strong-willed, but she was the most gentle person that you would ever know, and always gracious about everything,"

Marguerite recently told her friend that, with the exception of the birth of her son, being part of the WASP was the best experience of her life.  Because of this patriotic American and her WASP peers, today  women are flying as military pilots in every uniformed service. 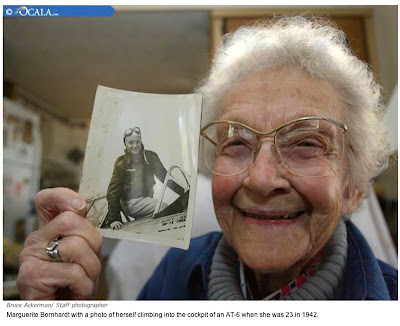 Marguerite Bernhardt took her last flight on May 15, in Ocala, FLorida at Hospice of Marion County’s Estelle’s House.   She was ninety-three.

She is survived by her brother,  George Tuffin;  granddaughter, Renate Bernhardt;  and great granddaughters Kiley and McKenzie. She was preceded in death by her only son, Robin.

A military memorial service will be held June 12, 2013 at the Florida National Cemetery.

God bless this American patriot and trailblazer and all of those whose lives she touched.

Posted by Wings Across America buglegirl at 8:59 AM 2 comments: