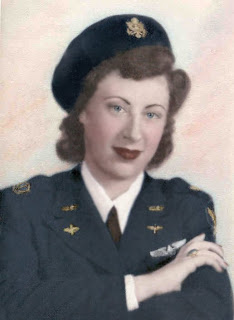 Mildred McLelland Christiansen was born on April 9, 1918 in a farm house out in the country in La Fayette County, between Higginsville and Odessa, Missouri. Her first memories of school were a one-room school house, where she shared a little country desk with her younger brother. Millie grew up in a loving, Christian family, and the Baptist Church was the touchstone of her life. She was baptized on New Year's Eve when she was 13 years old. Even as a young teenager, she participated in her church, teaching Sunday School to fifteen-year olds when she was only nineteen. One of her jobs was encouraging 200 kids to read their Bibles every day. Later on, Millie even taught Sunday School at First Baptist Church, Sweetwater, while she was in training at Avenger Field, where she still has friends, including Tula Mae Pinkard, the wife of WASP Flight Instructor, Harl Pinkard.

Millie graduated from Tulsa Business College and worked as secretary to the District Superintendent of Prudential Insurance Co. and for Carter Oil Co, but in 1942, after Pearl Harbor, she and her mother took a first aid course in order to do something to help with the war effort in America. The instructor invited them to his Civil Air Patrol course. That is when Millie first fell in love with flying. She desperately wanted to take lessons: "One Sunday night at church, a friend came up to me, and he said, ‘Midge, you look unhappy, what’s the matter?’ I said, ‘Oh, there’s just one thing keeping me from learning to fly.’ And he said, ‘What’s that?’ And I said, ‘Fifty dollars’. He said, ‘Come down to the office’. The next day he handed me fifty dollars in cash."

After completing the required hours and passing the tests, the personal interview, and the Army physical, Millie entered Army Air Force flight training at Avenger Field, Sweetwater, Texas, on Easter Sunday, 1943. "Our barracks were not completed. They didn’t have doors or windows. So you can imagine. When I got there, I thought they’d furnish a little bit of stuff, you know, a towel, a wash cloth, you know--some things. They didn’t. And I didn’t take any along. So, the first few weeks, until they let us go to town and get the towels, the Texas wind dried me!"

When Millie graduated in October, 1943, she became a member of a pioneering group of women pilots-- the first in history to fly America's military aircraft, the Women Airforce Service Pilots, WASP of WWII. After graduating, Millie was assigned to the Fifth Ferrying Group at Love Field, Dallas, Texas, and served as a ferry pilot. She ferried YPQ-8's and 14's, BT-13's, UC-78's, AT-6's, UC-45's, and AT-7's and 11's. She was transferred to San Marcos AFB, Texas (a navigation training school), where she met Lt. Theodore (Ted) J. Christiansen, the pilot who flew her home to Tulsa in December, 1944. Ted and Millie were married at the Army Air Base in Sebring, Florida, in 1945-- but only after he promised her that they would ‘tithe’ at least 10 percent of their income.

The couple moved to Michgan, where they started their family and raised their son and daughter. Millie worked for 26 years as the Administrative Assistant to four Airport Managers at the Muskegon County Airport, Muskegon, Michigan. She also served as assistant clerk for the Township for 14 years, Secretary of the local Board of Education for eight years, Officer of Altrusa, Intl., Service Club.

The Michigan Sesquicentennial Commission honored Millie for 45 years of aviation experience, and in July of 2009, Public Law 40-111 was signed into law that will award Millie and 1,113 other WASP the Congressional Gold Medal for their service in WWII. It is the highest civilian award that Congress can bestow.

Milie's published works include: "Women Of The Bible" and "Muskegon County Airport, A History". She also authored several articles, including: "Vignettes of Bible Heroes," "Travel U.S.A.," "Tidbits of Bible History," and "Another Way to Put It."

Of all the memories I have of Millie, this last story (which occurred when she was a child) really sums up who Millie was...her gentle, loving, giving spirit and her faith, which really did move mountains in her life. "Well, my grandmother came to live with us... And she always wanted to earn her living, so she did the dishes and did things like that. So she had me read the Bible to her while she did the dishes. I came to the word ‘tithe’. ‘What is tithe?’ And she explained it to me. So, I had just earned a dime painting a gate or something or the other, and she explained that a penny of that belonged to the Lord. So grandma got me two cold cream jars, and I put a penny in one and nine pennies in the other." Millie tithed all her life, and that is why she wouldn't agree to marry Ted until he assured her that they would tithe as a family. They did. She always gave back much more than ten percent, and God blessed it 100 fold.

What a blessing she was to so, so many.

Posted by Wings Across America buglegirl at 2:02 PM No comments: