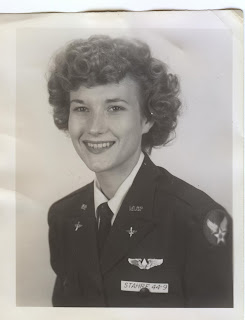 Esther Lorene Cuddington-Rumler, 84, of Farmington passed away at 10:45 am on Thursday, Sept. 20, 2007 at Methodist Medical Center, Peoria.

She and her 1st husband owned and operated Cuddington Insurance Agency in Farmington for 40 years, retiring in 1981. She served in the US Air Force. During WWII, she enlisted in the WASP where she was trained as an Air Force service pilot. 1850 women were accepted for training at Avenger Field in Sweetwater, TX. The purpose of the program was to free male pilots for combat duty.

Training took six months, and upon graduation, she received various assignments including ferrying airplanes from factory to base, towing targets for gunnery practice, testing new or repaired aircraft, and basic and advance flight instruction. In 1944 the WASP program was deactivated.

In her own words, Esther wrote about her life in WASP Betty Turner's book, "Out of the Blue and Into History."

"I was born on September 18, 1923, in San Antonio, Texas. I joined a group of women known as Texas Wing of Women Flyers, (TWWF). We obtained training that cadets had received at the cadet center in San Antonio, Texas. The classes covered physics, theory of flight, aircraft identification, navel air and sea identification, navigation, map reading and theory of war maneuvers. We received Link trainer instructions at Randolph Field, and Morse code and blinker code at Brooks field. While attending TWWF classes, I was secretary to the engineering officers Col. Anderson and Col. Ferguson, who was a WWI pilot at Kelly Field. I flew Cubs at the airport in San Antonio, and Aeronica in Alice, Texas at Knolle Flying Service to get 35 hours. I applied to go into the WASP, and entered class 44-9. I was assigned to Eagle Pass, Texas Army Airfield, an AT-6 basic training school. We flew the PT-19 and AT-6's.

After deactivation, I attended CAA School in Ft. Worth, Texas for tower and radio range school. We learned how to take code at 20 words per minute on the typewriter, radio broadcasting and weather observation with ribbon-like tape, and place it in another machine to go out over the National Weather Service.

On June 12, 1945, I married Captain I.J.Cuddington. He had been a gunnery instructor at Eagle Pass. He was attached to the Eighth Airforce flying P-47s at Abilene AAB. In March 1946 we were in Salt Lake City, Utah when Johnny got out of the Air Corp. We settled in Abilene, Texas, where we both instructed flying and did charter work until January 1948.

Johnny was recalled to active duty, and we were sent to France AAFB, Panama Canal Zone. While I was there, I was asked to be a flight scout leader for a group of 17 year old girls. I got permission to teach them engines with an R2800 cut-away engine. We studied map reading and navigation. At completion, the young ladies received their wings at the France AFB Officer Club.

In 1949 we were based in Guatemala City, then sent back to Albrook Field, Canal Zone; we were reassigned to Chanute Field, Rantoul, Illinois for his deactivation.

While in Rockport, I flew a friend's twin-engine Aztec on a couple of cross-country trips to McAllen and Matagorda Island.

My hobbies are golf, horseback riding, and painting.

I was on the board of the Illinois Art League for seven years. when the painting bug bit me, I attended college classes at the University of Illinois, two courses at Western Illinois University, and four semesters at Spoon River college. People like my paintings enough to buy them.

Posted by Wings Across America buglegirl at 7:58 AM