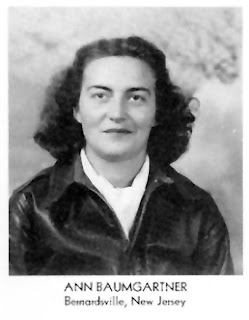 “Last time we spoke,” Wilber Wright said one day, “I asked what sort of a girl would want to fly experimental military aircraft. You didn’t say, “ he laughed."

“Well, I guess just a sort who, instead of religiously practicing the piano, had to go out and see what was happening in the woods that day, or down at the brook, or high on the hill. And then one day she saw an airplane fly by.”

The following is reprinted from Ann's own words from WASP Betty Turner's "OUT OF THE BLUE AND INTO HISTORY:"

I graduated from Walnut Hill High School in Natick, Massachusetts, and from Smith College at Northampton in 1940. I was inspired to fly by a visit from Amelia Earhart to my grade school, an incident I would never forget. My father, an engineer and patent attorney, took me to the Newark Airport to watch the mail planes came in at night to watch Clarence Chamberlain train for his attempt to fly the Atlantic. I learned to fly in 1940 at Somersset Hills Airport at Basking Ridge, New Jersey. I soloed in eight hours and bought an old Piper Cub to build flying time.

I learned of the WASP organization while working as a writer for the New York Times. I reported for service in the WASP in January 1943 , at Howard Hughes Field, Houston Municipal Airport, in the class of 43-5. After graduation September 11, 1943 I was assigned to Camp Davis, North Carolina, flying and towing targets for artillery cadets to shoot at. From there, I was assigned to Wright Field Air Base in Dayton, Ohio, where experrimental testing of US and foreign military planes is done. Among the tests I flew were: air refueling using a B-24 as tanker and a P-38 as refueling aircraft; the first pressureized fighter cockpit in a special RP-47; tests flying a special P-38 where a cockpit replaced one engine turbo in order to test off-center flying in preparation for the twin-mustand P-82; weight and distance flying of the B-29 in preparation for the atom bomb mission to Japan; and evaluation flight of our first jest plane, the YP-59A fighter. I was the first woman to fly a jet for nearly 10 years. I also flew some British bombers and the German JU-88.

AFter deactivation, I married the designer of the P-82, Major William Carl, who later designed and built hydrofoil boats for the Navy and Grumman Aerospace. We have two children, one in England and one in Canada, Peter and Peggy. While the children were in school, I did flight instruction, performing insturment training for United Airlines, third pilots at Zahn's Airport on Long Island. My ratings included: private, commercial, instrument, multi-engine, flight instruction and instrument.

I was a jounalist specializing in science and the environment. I continued writing for Newsday and other publications. An avid sailor, my husband and I sailed the Atlantic twice and cruised the Mediterranean, the British Isles, and the French Canals. For the past 15 years we have resided in Kilmarnock, Virginia, where I have written a sailing book, The Small World of Long Distance Sailors, and a flying book, A WASP Amoung Eagles, about what it was like to be an experimental test pilot in WWII.

A school lecture by Amelia Earhart in 1932 inspired Ann Gilpin Baumgartner Carl to learn to fly. Like Earhart, she became an aviation pioneer. She was the first American woman to fly a jet airplane. While serving with the Women's Air Service Pilots (WASP) during World War II, she first flew the turbo-jet powered Bell JP-59A on Oct. 14, 1944.

During her wartime career as a test pilot at Wright Field in Ohio, she was the only woman test pilot flying World War II combat aircraft such as the P-38, P-47 and P-51.

She met Orville Wright and often found herself seated next to him at dinners, said her son, Peter Carl of Cambridge, England.

While flight testing the P-82 Twin Mustang, she met her husband-to-be, William P. Carl. They married on May 2, 1945, four days after the Allies claimed victory in Europe.

Mrs. Carl's adventurous spirit continued after the family settled on Long Island, N.Y. She was a flying instructor and began a sailing career with her husband. After his retirement, they sailed the yawl "Audacious" across the Atlantic to cruise through Europe and return. They eventually settled in the Northern Neck of Virginia, from which they commuted yearly for 22 years by boat to Abaco Cay in the Bahamas.
Born at Fort Gordon in Augusta, Ga., in 1918 while her father served there during World War I, Mrs. Carl graduated from Smith College in 1939 with a pre-med degree. She had brief stints as a medical researcher, a dancer and a writer for The New York Times before realizing her ambition to fly.

She wrote about her military experiences in "A WASP Among Eagles: A Woman Military Test Pilot in World War II" and about her sailing life in "The Small World of Long Distance Sailors."

In addition to her son, she is survived by a daughter, Margaret "Peggy" Laufer, of Ontario, Canada, and three grandchildren.

Her memorial service will be Sunday at 3 p.m. at Grace Episcopal Church in Kilmarnock. Her cremains will be buried at sea with the cremains of her husband.

Posted by Wings Across America buglegirl at 9:59 AM