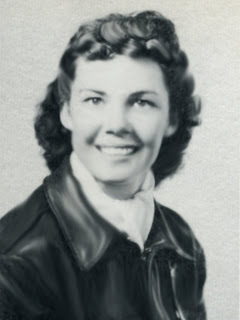 Another wonderful WASP is gone…but her legacy is grand…her life an inspiration—she left this world a far better place for her time in it…and it was an honor to have known her.

Kitty filled up this world with love—unconditional love.

One of her son Jim's great memories of his mom is when he flew Kitty and his son to Sweetwater and watched her put her handprints in cement.

Here is the message from her family:

We regret having to tell you that "Kitty" Edna Hines Bishop died Sunday morning at her home in Hattiesburg, MS.

She had suffered from Parkinson disease for a number of years and would have good days and poor days. But through it all, she remained cheerful and a fighter.

She is survived by her husband, Jim Bishop, four children, two sons, Drs. Jim and John Bishop, the former of Collins MS and the latter of Guntersville AL, two daughters Lynn Bishop of Atlanta GA and Gail Bishop of Ocean Springs MS. In addition she had six grandchildren and two great grandchildren. She had learned the Friday before her transition that another grandchild was expecting and tests confirmed the expected to be a girl. Kitty rejoiced at the news.

Kitty was proud of her family and proud, too, of her affiliation in the W.A.S.P.'s keeping abreast of its activities and attending many of the reunions at both Sweetwater and elsewhere. One of the most enjoyable reunions was the one in Sweetwater she attended with her son, Jim, and his son, John, when they flew a Cessna 182 from Hattiesburg to Sweetwater.

She was born in Rockey OK on Leap Year's day, 1916 and attended public school there. Her maternal grandfather was a participant in the original Oklahoma land rush. Her immediate family moved to California first to Bakersville and then to Livermore. It was there she started her flying career, ultimately buying a small Aeronicia and flying out of Bishop California to build time.

She entered the W.A.S.P program and graduated in the class of 43-4. 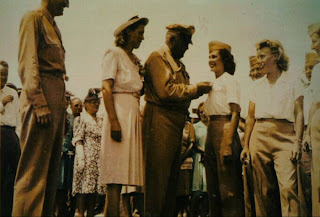 She faithfully kept in touch with many of her fellow members. She was assigned ferry duty and logged time in BT's, AT-6's, UC78's, C45's, B-17's, P-47's. and A-25's. Her last assignment was in a tow-target squadron stationed at Liberty Field flying duty for Camp Stewart GA, now Fort Stewart.

While at Liberty Field, she met her later-to-become husband who was also stationed there and a fellow pilot. After the W.A.S.P. deactivation, they were married in a small pre-Civil War Presbyterian Church. Part of their 50th wedding anniversary was revisiting that area and that church.

Although she didn't make an issue of the deactivation, she did feel it was an injustice and through the years sought some sort of recourse. She was signally happy when W.A.S.P.'s were awarded militarization and appreciative of Mississippi's U.S. Congressman "Sonny" Montgomery's active participation in the process.

This wasn't her sole passion, however. She finished her college degree at the University of Southern Mississippi and entered their graduate program earning her teaching specialist degree and then entering the PhD program at the University of Alabama. She taught several years in the U.S Teacher Corp, later joining the faculty of Prentiss Junior College. She worked both publically and privately in testing students, publically in Hattiesburg, Ms., New Orleans and Bogalusa LA.

She formed a newcomer service in Laurel MS and later was employed with the Mississippi Employment Service. She was active in civic affairs including serving as a Girl Scout Leader in both Laurel and Hattiesburg. She was a devoted member of First Baptist Churches of Laurel and Hattiesburg and later, University Baptist Church of Hattiesburg. She worked in various area of these churches and served in a number of church committees.

A memorial service will be held at University Baptist Church, Hattiesburg, Dr. Phillip Reynolds, pastor. The Rev. Farrell Blankenship assists in the service. Burial is in Roseland Park Cemetery, Hattiesburg.

Posted by Wings Across America buglegirl at 9:34 PM