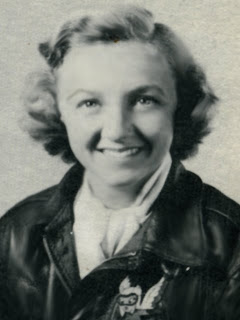 "Flying became an obsession with me in 1941. Gas rationing was in effect in those days because of WWII, so I rode my bicycle to the airport for flight training, joined the Civil Air Patrol, and became very interested in the newly formed group of women pilots--the WASP."
Jean Brown from p. 94 -- "Out of the Blue and Into History" by WASP Betty Turner.
Brown--H. Jean le Poer Trench, beloved wife and mother, died peacefully at the age of 89 on February 11, 2009. She was born on July 21, 1919, in Staten Island, NY, to the late C. S. J. Trench and Helen Gard’ner Trench. She graduated from St. Catherine’s School, Richmond, VA, in 1938.

Jean’s obsession for aviation led her to join the Civil Air Patrol, and then to work nightshift at the Piper Cub aircraft assembly plant in Lock Haven PA installing fuselages, so that she could take pilot lessons during the day. In a desire to serve her country during World War II, Jean was among a select few who earned her wings as a Woman Airforce Service Pilot, WASP class 43-W-4. While stationed at the Romulus Army Air base, Jean piloted ferry missions delivering combat aircraft to the airbases in the United States. She was qualified in the At-16, PT-19, C-47 and the PBY “Flying Boat.”

In the summer of 1944, Jean resigned from the WASP and later joined the American Red Cross where she ran a “clubmobile” providing coffee breaks to the servicemen of U.S. Army Air Bases stationed in England. She met Sgt. Geoffrey Alan Brown, Sr. in Bury St. Edmonds, England. The couple was wed on December 15, 1945, in Staten Island, New York.

For many years Jean and Geoff, and their three children lived at the “Seven Oaks Farm” in Chalfont, PA where they established a series of wayside shops selling home grown produce, eggs, general store goods, nursery plants, artwork, and hand crafted items to the residents of Bucks County, PA. After the family left the farm, Jean joined the administrative staff at St. Christopher’s Hospital for Children in Philadelphia where she worked in the Pulmonary and Cystic Fibrosis Center. In later years, she brought her talents and love of plants to the Morris Arboretum in Philadelphia, PA. The couple spent most of their retirement years in their home in Doylestown, PA before moving to the Artman Home in Ambler PA. Jean’s interest in people, books and learning led her to the Doylestown Public Library where she volunteered her services for many years. She also published several articles including one entitled “Evicting the Moles” (Green Scene January 1988).

Mrs. Brown is survived by her husband of 63 years, Geoffrey Sr. and her three children; Pamela B. Benson of Perkasie, PA, Geoffrey A. Brown, Jr. of Pennington, NJ, and Allison M. Brown of Lambertville, NJ. She was predeceased by her son, Christopher, and her brothers, Charles S. Trench, and J. Patrick Trench.

Jean loved animals and in lieu of flowers, contributions to the Humane Society of the United States would be greatly appreciated. A memorial service will be held on 05/02/09 at 11:00 am at the All Saints Episcopal Church, 9601 Frankford Ave. Phila., PA. The service will be officiated by the Rev. Jeffrey T. Liddy. Kirk and Nice Suburban Chapel, Inc. will coordinate the event.
Posted by Wings Across America buglegirl at 11:09 AM