'As I acquired each new flight rating, I would wire Jacqueline Cochran,
"Do you need me now?"  I wanted so badly to be a part of that group and to serve the war effort to the best of my abilities. I figured if I could just keep exceeding the requirements  for entry, my age would be overlooked.'  Suzanne DeLano Parish, WASP
The sad news came over the phone just a few hours ago.  A reporter in Michigan called to say that  WASP Sue Parish passed away in her California home yesterday.  She was 87. 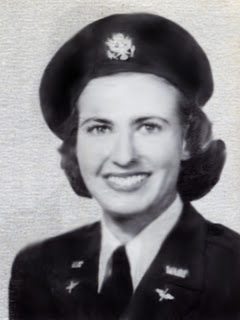 Suzanne Parish, a lifelong Kalamazoo, Michigan resident, who was co-founder and vice chairwoman of the Kalamazoo Aviation History Museum, better known as the Air Zoo, and a member of the Michigan Aviation Hall of Fame, had been in failing health, said her son Will Parish.

“Our mother was a woman whom I and all my siblings admired for living a life of many passions,” he said.

“She was an avid pilot, loving to perform loops and barrel rolls and fly-overs at air shows around the country. She was an accomplished equestrian who competed very successfully in many local horse shows for years.

“She loved acting in local theaters and was quite well known for portraying her characters vividly and with great creativity,” he said.

"She will always be an inspiration to us.”


Her passion in her early teens was horses, and Sue had planned to attend Cornell and become a veterinarian.  She was a gifted horsewoman but a fall in 1941 and a fractured ankle derailed her plans.  As Sue put it, "I was restless, getting on my mother's nerves, hobbling around the house on crutches, so she suggested I take flying lessons."


She took her first lessons from Irving Woodhams, who carried a pilot's license signed by Orville Wright.  "I loved it so much that flying became my passion."


When America entered World War II and the WASP program first started, Sue was in a hurry to join.  She wanted to fly for her country, but she wasn't old enough.   Every rejection was met with more determination to continue flying and another letter to WASP Director, Jacqueline Cochran.  By the time she was old enough to apply for the training program, Sue had a commercial license, instrument rating, instructor's rating and ten times as many hours as required. When she turned 21,  She was accepted as a member of class 44-6.  She  arrived at Avenger Field in Sweetwater, Texas, and survived seven months of Army Air Force flight training in the hot, windy, west Texas summer,  flying the PT-17's, BT-13's and AT-6's.  She completing the exact same training as the male AAF cadets and graduated on August 4, 1944.


After earning her silver WASP wings, Sue was assigned to Army Air Force Instrument Instruction School in Bryan, Texas, as a test pilot.  She flew with returning combat pilots who needed instrument flying and flight tested the repaired planes before the male pilots were allowed to fly them.


After the WASP were disbanded, Dec. 20, 1944, Sue wrote to every aviation company and airline in search of job as pilot. She even lobbied her  uncle, John Gilmore, who was then President of the Upjohn Company.  Her uncle John  was not yet ready to hire a 'female' pilot.


In 1945, Sue married Preston "Pete" Parish.  Eventually, the couple had five children: Barbie Parish, Katie Anne Miller, Will Parish, Pres Parish, and Dave Parish.  When Pete decided to purchase half interest in a single-engine 35C Bonanza, they both began flying again, and began collecting an armada of aviation history that would eventually evolve into the cornerstone of the Kalamazoo Air Zoo.  The Parish's co-founded the Air Zoo in 1977. Sue's pink P-40, which she flew at many air shows for over a quarter of a century, hangs from the ceiling at the main entrance to the Air Zoo.


Sue was a board member of the Michigan Space Center in Jackson, the Civic Auditorium, the P-40 Warhawk Pilots Association, Holderness School, the Ninety-Nines, Nazareth College, and was inducted into the Michigan Aviation Hall of Fame and the EAA Warbirds of America Hall of Fame.  Her last accolade was presented to all the WASP on March 10, 2010: the Congressional Gold Medal, for their pioneering, patriotic service to our nation.


She is survived by her 5 children and 14 grandchildren.

Sue represented a very special kind of pioneering pilot -- she didn't really enjoy talking about flying, she loved FLYING.  She was a gentle, kind and insatiably curious woman, with a giant sized smile that lit up every room she ever entered.  Sue was a lady -- a fearless flyer -- a pioneer -- a WASP.


It was such a joy to see her in Washington DC -- on March 10, 2010, to receive her Congressional Gold medal replica.  She was beaming from the inside out. We met Sue and Norm Carter in the center of Emancipation Hall. They both lobbied for the Fly Girls Exhibit to travel to the Kalamazoo Air Zoo.  They encouraged Museum Director, Bob Ellis to travel to DC and see the exhibit, which he did.  Sue's passion for educating and inspiring young people about aviation has been contagious.  Because of Sue, the  Fly Girls traveling WASP exhibit will open at the Air Zoo at the end of May. We are so sad that she will not be able to see it, but also grateful that she was able to see it at the Women's Memorial and honored to be able to share the exhibit in such an extraordinary place-- which now serves as a living tribute to Sue Parish's passion for flying and for education.

Obituary in the Kalamazoo News

History of the Air Zoo and Sue's legacy and love of aviation.

Kalamazoo Gazette  on Sue Parish--2009
Posted by Wings Across America buglegirl at 9:45 PM