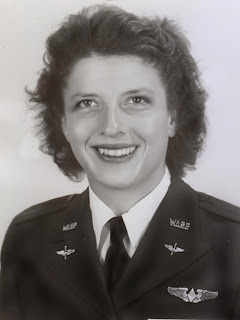 
Ruth Clifford was born March 25, 1917, in Lakeland, Florida.  After graduating from high school, while working as a student photographer, she took a ride in a small plane to take some aerial photographs and 'fell in love with flying’.

Ruth and her sister, Mary (WASP 43-4),  learned to fly at the same time as students of Walter Haldeman.  In 1942, Ruth joined the Civil Air Patrol, and, with over 450 hours of flying in her logbook, Ruth was accepted into WASP training as a member of Class 44-8. 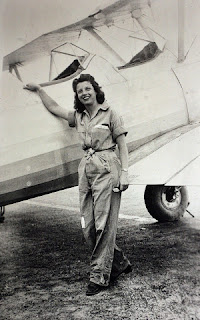 She later wrote in her scrapbook, "training was climaxed by graduation, where we received our beautiful silver wings and Santiago blue uniforms."

After graduation, Ruth was stationed at Cochran Field, Macon, Georgia, where she flew as an engineering test pilot for AT-6's and as a maintenance pilot for slow timing engines.

After the WASP were deactivated, she returned to Lakeland and became a flight instructor at Johnson Flying Service, Winter Haven, Florida. She later moved to St. Petersburg, Florida, where she flew as a flight instructor at US Airlines.  While in St. Petersburg, she married Peter Hubert, one of the founders of US Airlines, and an Army Air Forces veteran pilot—Pacific Theatre.

In the mid 1940's Ruth was Chairman of the Florida Chapter of Ninety-Nines and helped stage the first "All Women Air Show”  in Tampa, Florida, March 1947.  Many WASP participated in the show and went on to fly in the First Transcontinental Air Race for Women (later named the Powder Puff Derby) from Palm Springs, California to Tampa, Florida.

She participated in other air shows and assisted Pete in the operation of US Air's flight school before retiring to raise their two children,  Clifford and Linda.

After loosing her husband, Pete, in 1963, Ruth became an active pilot in the CAP and remained active until the mid 1990's, earning the rank of Lt. Colonel.  She served as Commander of the Pinellas Senior Squadron for six years and worked in the emergency services flying activities as a mission pilot and observer, participating in many searches for missing aircraft.

Ruth flew as a part-time corporate pilot for a large development corporation from 1978 to 1983.  At 80, she was still flying and had logged over 2,300 hours. As she wrote in  2001,  "My aviation career has been long, interesting and very rewarding."

Respectfully posted by Nancy Parrish-- with thanks to WASP Betty Turner's, "Out of the Blue and Into History" and The St. Petersburg Times.

All are invited to join in a Celebration of Ruth’s life on Sept ll from 2-4 PM at the Hangar Restaurant at Albert Whitted Airport in Downtown St. Pete. Casual dress,  please.  In lieu of flowers,  please make a donation to the charity of your choice.

“Goodbye,  Ruthie.   Now,  with Pete at your side, ‘Off you go into the wild blue yonder.’ “
Posted by Wings Across America buglegirl at 6:10 PM