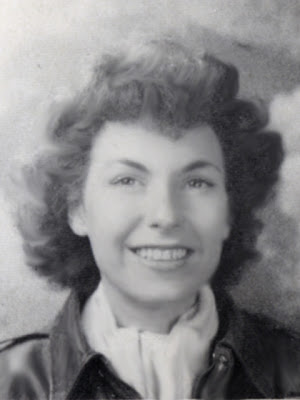 On the day that Marcella Tucker was to receive the Congressional Gold Medal in Washington, the 90-year-old woman was resting at home in San Jose, weakened by pneumonia and unable to travel across the country.
Her award, more than 65 years in the making, would have to wait just a little bit longer.

Tucker, one of about 1,000 trailblazing women who became the first female pilots in U.S. history to fly military aircraft, finally received her medal in the mail about three weeks ago.
Monday, Tucker died from complications from pneumonia.

"She said the award is nice but serving in the Army Air Force and flying the planes was worth more than the award could ever cover," said her son, Gary Tucker. "She really loved what she did. She said, "When I was in the sky, I had the whole sky before me. There were not limits to where I could go."

After President Barack Obama last year signed into law a bill to award the Women Airforce Service Pilots with the Congressional Gold Medal, Marcella Tucker sat on the couch in her San Jose home with the Mercury News and reminisced about her military service.

In an effort to address the shortage of pilots during World War II, the Women Airforce Service Pilots (WASP) program was established in 1942. They were assigned to noncombat missions in the United States. Tucker was one of the 25,000 women who answered the military's call for pilots, and was among the 1,830 accepted and less than 1,100 who

actually flew missions. She was sent to Howard Hughes Airport in Houston for extensive flight training. After earning her wings, Tucker was stationed at Love Field in Dallas. The female pilots were assigned to 120 bases across America.

As she looked though her scrapbook in 2009, Tucker pointed to a photo of herself sitting on the wing of a BT-13, a single-engine propeller airplane used to train American pilots during the war. She was 23 at the time.

She recalled her journey from Santa Clara to Love Field in Dallas, where she was assigned for nearly two years and flew a variety of planes, including once co-piloting a B-24 bomber from Dallas to March Field near Riverside.
"It was a wonderful experience because we had orders to go all over: east, west, north and south," Tucker said in the interview. "We picked up airplanes at the factory and delivered them to the training fields."

In the months and weeks before her death, Tucker could still recall specific details about the planes she flew and the missions she completed, her son said. Tucker's orders sometimes required her to deliver light cargo or do a flight check to make sure a plane was fit to be shipped overseas. She said she often would ferry new and repaired airplanes from factories.

After being featured in a Mercury News story in July, Tucker was reunited with a long-lost family friend. Lisa Blake, 33, is the granddaughter of Louesa Thompson Beard, a fellow Airforce Service Pilot and a close friend of Tucker's who passed away 14 years ago. Blake had since lost touch with Tucker.

The two pilots had met in 1977 while organizing a registry of surviving WASP.  "They were best friends for the rest of their lives," Blake said. "I was with them all the time."

In April, when it became apparent that Tucker's medal might not be coming anytime soon, Blake got her hands on a replica and presented it to Tucker in her nursing home. Tucker was amazed to receive the replica and loved the design, Blake said.

"I really felt like it was so important that she get it before she died," Blake said. "It was as though I was able to give to my grandma and to her.  It was a neat experience to share that with her.  It felt like I was sharing that moment with both of them."

Had the official medal ceremony in Washington taken place six months earlier, Tucker surely would have made the trip, her son said. When his mom decided not to make the trip, Gary recalled what she told him:
"I have my memories from my flying. Nothing can take that away from me."

A memorial service will be held for Tucker on Tuesday at 10 a.m. at St. Andrew's Episcopal Church, 13601 Saratoga Ave. in Saratoga.