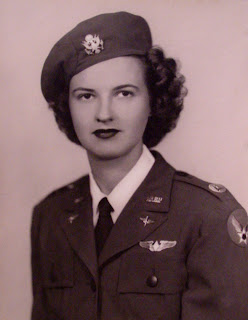 WASP Elizabeth Whitlow Smith,  patriot, pilot, mother and  true southern lady of grace and humility transitioned from this life to the next on June 16, 2011.   She will be missed by all those whose lives she touched.

"Betty" was born in the lush green landscape of Pine Bluff, Arkansas on December 29, 1920 to Joseph and Mary Whitlow.  From as early as she could remember, airplanes fascinated her.  She felt drawn to the sense of freedom and space she felt when she looked up.

As a young girl, Betty covered her bedroom walls with aviation  pictures, including a magazine ad featuring  an airplane silhouette along with a bottle of perfume.


During her sophomore year at the University of Tulsa, the 19-year-old psychology major, was given the opportunity to fly in the Civilian Pilot Training Program (CPTP).  Betty became one of two women surrounded by 18 men in the government sponsored program, eventually earning her pilot's license.

Once she soloed, Betty's  first passenger was her mother, Mary.    Soon, Betty became 1/4 owner of a Piper Cub and continued flying while working at Douglas Aircraft in Tulsa, inspecting equipment on modified B-24's.  Once she had accumulated the required 200 hours, she was accepted into the WASP training program and  entered training at Houston Municipal Airport (now Houston Hobby) as a member of the second class. 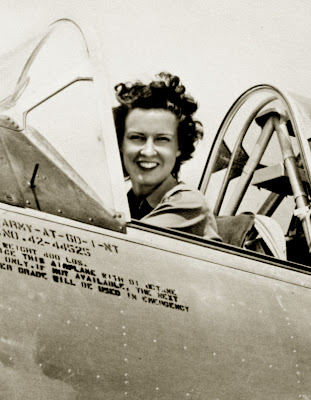 After graduation, she was stationed with the 5th Ferrying Group, ATC at Love Field, Dallas, Texas.  During her time as a ferry pilot, Betty flew PTs, BTs and AT6s. Later, after graduating from pursuit school, she ferried the P-51, P-40 and P-47.  She also completed Officers Training School in Orlando, Florida.


Following her service as a WASP, Betty was married for 30 years to Ben Rummerfield, a geophysicist.  His career with a seismic exploration company took the couple to Caracas, Venezuela  (where their first daughter was born), Mexico City (where their first son was born) and finally, back to Tulsa  (where their second daughter and son were born).     Betty spent her time raising their 4 children and, eventually, became involved in volunteer work with the Junior Board of the Children's Home, YMCA, and as a Water Safety, First Aid and Sailing Instructor for the American Red Cross.


After 30 years of marriage, the couple parted and Betty met Dan Smith, whom she married more than 3 years later.


Betty was a cheerful volunteer, both at her church and with the Assistance League of Tulsa.

On January 27, 2002, Betty was kind enough to allow our Wings Across America camera into her home.  Throughout her interview, there was a quiet grace and kindness that was captured, along with Betty's thoughts on being a WASP, for generations to come.  May the following words touch your heart just as they did ours.

On the WASP:  "We were a group. We were not known as individual flyers like those who had gone before -- Amelia Earhart or Jacqueline Cochran,  but as a group we really opened things up in the military for women  and its gratifying to know that they appreciate that.  They do express that and I think that that's very nice.  I hope that it will encourage young people, if they do get to know about us, that they'll see that they have a chance to do what they have a dream to do... what they dream of."

On getting thru the tough times: "Having friends and a belief system...knowing that its gonna be OK. There is something greater than us watching over us."

On encouraging future generations: "If they have a dream, something that they feel any passion about, that they just think that would be the thing that would just make everything worthwhile for them, they should hang on to that dream and not be swayed away from it by anyone.  Because there are so many people out there that say 'Oh, you can't do that, that's not possible, it's not been done' ... Don't listen.  Don't listen to that. Just follow your dream."

Taken from Wings Across America's interview with Betty Whitlow Smith, 2002

Reposted from ObitsforLife.com:
"Betty was a devoted Mother who raised her children with a sense of adventure and curiosity. Little did her children know until adulthood that she ferried all single engine Airforce fighter aircraft in the American inventory during WW II with a spiritual commitment to the air ways while skipping across the windy skies, the setting sun, and billowing clouds where arching rainbows are caught on wing tips.
Family and friends wish you to fly high and that your wings “touch the face of God”.
We Love You"

Article on 2 Tulsa WASP
Posted by Wings Across America buglegirl at 5:41 PM