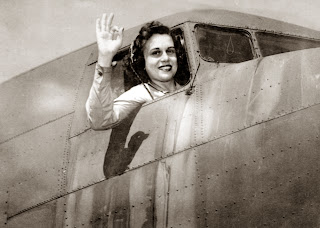 Geri was in the first class of 25 Women Airforce Service Pilots ("WASP") - the women who flew military aircraft in World War II.   One of the proudest moments in Geri's life was when she and Van, her husband of 69 years, attended the March, 2010 ceremony in Washington D.C. at which the WASP received the Congressional Gold Medal for their service and sacrifices.

But the WASP didn't make Geri; she was plucky from the start.


Geri was born in Emmett, Idaho in 1920, just when the Pacific Northwest was getting its ten year head start on the Great Depression. Geri spent some of her early years with her paternal grandmother, Mattie, a beaver trapper who lived on a remote Wyoming ranch. One of Geri's favorite pictures is astride her enormous horse, accompanied by her dog in front of the nearest one-room school house.

Most of Geri's youth was spent accompanying her parents - an itinerant barber and a fruit packer - as they traveled from town to town and camp to camp in their Model A roadster in search of entrepreneurial opportunities. The life apparently suited her; by the time she graduated from high school, Geri had skipped two grades, led her high school debate team, and learned to sew, weave, crochet and knit every fiber she could find.

After two years of college, and a few months of small jobs, Geri decided that she wanted to fly. So she agreed to do the bookkeeping at the local air field in exchange for flying lessons. She quickly became a flight instructor, moved on to taking hunters into the wilderness, and then graduated to piloting multi-engine planes for smoke jumpers. By the time the WASP were formed in 1942, Geri was a 23 year old with over 2000 hours flying multi-engine aircraft.
It was just the experience the WASP were looking for.


After the war Geri helped her new husband, Van (whom she had met on a troop train) earn his flying license, and they moved to Alaska, where they owned and operated a bush pilot service. After four years - which produced three sons (Paul, Ken and Bruce) and an airplane- shaped hole in the ice - they moved to the mining town of Wallace, Idaho, where Geri owned and managed a dime store while Van completed his engineering degree.

The family lived in the basement of the dime store while Van and Geri saved for a three month trip to Europe, which they memorialized with Geri's pen and Van's Leica camera. 50 years later, the three sons can still recall almost every day of that trip.


While in Idaho, Geri was the only woman on the Wallace City Council, attended the 1964 National Republican Convention, helped Barry Goldwater win one of the least conservative counties in Idaho, was PTA parent of the year, and was active in Eastern Star, PEO, the League of Women Voters, and the Episcopal Church. And in 1970, she was in charge of the Census for Eastern Washington and North Idaho.

Meanwhile, she sewed her sons' shirts, knitted their sweaters, darned their socks and supervised as they washed and ironed their own clothes.

Geri and Van moved to Casa Grande in 1971. In 1976, Geri helped manage Barry Goldwater's Senatorial campaign in Pinal County - which he had never won. He won the county by one vote.

In the 1980's and 1990's, she won several first prizes for her pine needle baskets at the Arizona State Fair.

Geri was a dynamo, and she will be remembered. She is survived by her husband and best friend, Van (93), by her three sons, three terrific daughters-in-law (Kathy, Kristine and Pam), eight grandchildren, and six great-grandchildren.

Geri Nyman was a very special and memorable lady.  She was one of only twenty-three  women who graduated as a member of the very first class of women Airforce Service Pilots.  Having accumulated over 2,000 hours of flying time, she was recruited by Jacqueline Cochran to be in the second group of American women pilots to travel to England to fly with the ATA and( Air Transport Auxiliary of the Royal Air Force).  After she agreed, she received a phone call from Nancy Love, asking her to join the civilian women group being formed to ferry aircraft in the US.  Geri turned her down-- because she thought she was on her way to England.


"Two weeks before I was to go to England, Jackie (Cochran) called me and said, "Get up to my NY apartment-- I’ve got news for you!"  I got up there and she said,  “I guess we’ve harassed them enough-- because I’ve just had authorization to start a Women’s Flying Training  Program in Houston.  But I have to tell you, you not only need lots of hours, you need lots of stamina.”  Then she showed me a letter and said,  “I’m not supposed to have this.” It was from the Air Force to the commanding officer that would be in charge of these first 25 (women pilots)-- and it said, “We have been told we must give these women an opportunity to fly. We know they will never be able to fly military aircraft.  Get rid of them as soon as possible.”   I guess we thought we could beat the odds."


Indeed they did, and more!  With fearless determination and a deep sense of patriotism, Geri Nyman and her fellow classmates became the FIRST women pilots in history to complete the Army Air Forces "Women's Flying Training Program,"  graduating and earning their silver WASP wings on April 24, 1943.

As a proud member of that first trailblazing group, Geri  leaves behind an even more important  inspirational legacy of compassion, courage, humor, grit, and boundless energy.

It was an honor to know her, and our time with Geri in her Arizona home was priceless.  When asked, "Other than your family, what is the one thing you are most proud of?"  Geri's answer?  "The things we did for other people."

God bless her wonderful family and the countless souls who have been touched by Geri's story and challenged to fly higher and continue to do just a little more for other people.

Posted by Wings Across America buglegirl at 4:14 PM