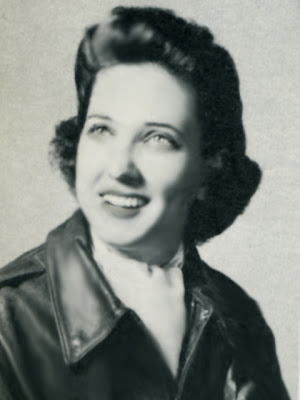 Macie Jo Myers Wheelis, formerly of Weatherford, Lubbock, and Fort Stockton, took her final flight on Saturday, April 14, 2012 and traded her earthly wings for heavenly ones.

Jo was born October 13, 1918 in Wylie, Texas to James and Ida Myers. She graduated from Woodrow Wilson High School in Dallas in 1936 and attended SMU. Jo followed her dreams always and advised all women to do what pleases them but make sure to do it right.


"When you look in the mirror, ask yourself if you are doing the right thing and proud of your accomplishments. Live your life as an example to others."

Jo lived a life full of adventure. During World War II, at the age of 24, Jo took the opportunity to serve her country as a Women Airforce Service Pilot (WASP). She was a member of the 43-W-5 class and trained at Avenger Field in Sweetwater, Texas. Jo and the other W.A.S.P.s were finally given the status of Veterans in November 1977, and on March 10, 2010 at a ceremony in Washington, D.C., the W.A.S.P. were awarded a Congressional Gold Medal.

Jo's life-long love for sports and outdoor activities was apparent in her award winning bowling, golf, raising and racing horses, fishing, hunting, and watching all Texas Tech sports. Keeping her mind and body busy helped her reach the age of 93.

Jo was survived by stepson and wife, Ted and Cassie Wheelis of Jacksboro; step-granddaughter, Lisa Wheelis of Dallas; foster son and wife, Burt and Radell Williams of Van Vleck; sister-in-law, Lyndelle Cullen of Hondo; brother-in-law, Bill Wheelis of San Antonio; nephews and wives, Mike and Jan Warren of Kerrville and James and Linda Clay of Irving; niece, Cheryl Green of Corsicana; and numerous great and great-great nieces and nephews.

reprinted from the LAUREL LAND SITE
Sign the guestbook

from Wings Across America:

On Veteran's Day, 2009, Senator Kay Bailey Hutchison invited all of the WASP of Texas to attend a special ceremony to receive a copy of the Bill to award them the Congressional Gold Medal.  As part of that ceremony, WASP Deanie Parrish wrote a tribute to every WASP who would be in attendance.  This is her tribute to our friend Jo, a quiet, thoughtful, gentle and kind WASP .  She is truly flying higher than she's ever flown before.


JO MYERS WHEELIS
From Weatherford, Texas
Class 43-5
A native Texan through and through, Jo did not get interested in flying until after she married. She then bought her own plane, and she and her husband spent most week-ends on fly-ins at air fields all over Texas. She was accepted into the WASP flying training program as a member of the fifth class.
After graduation, Jo was assigned to the Ferrying Division at Romulus, Army Air Base, Michigan. She completed pursuit school and then ferried 15 different types of military aircraft, among which were the P-51, P-63, P-39, P-40 and P-47, After the WASP, she returned to her own successful baking business. She was an avid golfer and bowler--and won the Dallas Singles Bowling Championship as well as other tournaments in both sports.
One of Jo’s fondest remembrances of her WASP training days takes her back to Avenger Field to the day she was selected as the pilot of a UC-78 for a Hollywood film crew who wanted to go up and ‘shoot’ film of Avenger Field so they could feature it in their news film. The pretty young girl pilot in an old ‘Movietone News Reel’, featuring the ‘Girl Pilots at Avenger Field’—is none other than Jo Wheelis!
Respectfully posted by Nancy and Deanie Parrish

Posted by Wings Across America buglegirl at 7:07 PM