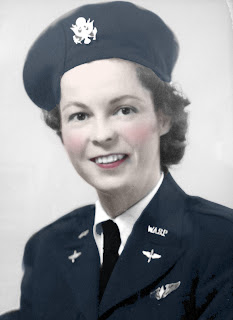 After graduation, a school in Burbank, California hired me. One of my student's fathers was a test pilot for Lockheed aircraft, and would fly his P-38 over the playground at our school. My brother was a Navy pilot, and many of my friends were joining the Army Air Corps, so I developed a keen interest in flying and wanted to do my part for the war effort.

A friend of my family, Ethel Sheehy, told me about Jacqueline Cochran and her program. I applied, and found I had to have 35 hours flying time and a private pilot's license. I learned to fly in a J-3 cub at Blythe, California. I was accepted in the WASP October 1, 1943, in class 44-4.

I was assigned to Independence, Kansas, flew BT-14, flew OSI and administrative personnel to various bases. I transferred to Perrin Field, Sherman, Texas, flight -testing BT-13's, after repairs. Ferried PT-19's and PT-17's to Kelly AFB for storage. Then sent to Foster Field, Victoria, Texas, flying the AT-6. I was transferred back to Perrin Field and married Lt. Francis Shipley. I continued to ferry planes from closed primary bases to Kelly AFB for storage.

After deactivation, I refused the offered reserve commission in the Army Air Corps to be with my husband. In 1956, I went back to teaching. I taught at military bases in Japan, the Philippines, Georgia, Arizona and Texas. When my husband retired in 1969, I accepted a teaching assignment at Randolph AFB and remained there for 15 years. I always taught Air Force children throughout my educational career.

I have two sons, David Peyton Shipley, married, who has two sons Jeffrey and Steve. They live in Tucson. David went through Fire Fighters Academy. He has been doing that for the past 11 years, loves his work. His wife is an architect. Charles was Vice-President of Arizona State Chamber of Commerce. He was the seventh biggest lobbyist in the state, a true political person. He is divorced and is notw President of The Arizona Mining Association.

I was chairman of the San Antonio WASP Convention in September 1992, and I am as active as I can be in the WASP Organization. Now I am Chairman of the TWU (Texas Women University) WASP Endowment Fund.

The official notification from her family is included below--it reflects their love and respect for this unique woman.

"In between was a wonderful life | her father said "you can do anything you put your mind to," and she did | a loving wife | a widow | a teacher | a pilot | a WASP | a sister | a mother of David Shipley and Charles Shipley (deceased) | a grandmother of four: Chris, Colin, Jeff, and Steve | a faithful friend | a military supporter | she was adventurous | loved to laugh | played golf and bunko | an independent spirit | she adored her family | traveled the world | was naive | feisty | hardheaded | very loving | she loved ice cream | poked the bottoms of See's Chocolate till she found her favorites | ate lots of chocolate | Betty | Hot Liz | Grammy | Ma Shipley | she will be greatly missed.

In lieu of flowers, please consider donations to the Alzheimer's Association or the American Diabetes Association.