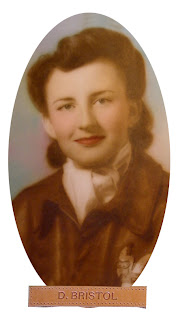 Doris  was born to Marie Todd Bristol and Vern Bristol in St. Joseph, Missouri on March 6, 1920.  Her love of flying began at an  early age:   "I was nine years old, and my father had a friend that had a bi-plane.  He took my sister and me  for our first ride. From there on, I just had to learn how to fly."  A few years later:   "When I was in grade school, we had to write a paper on what you wanted to do when you grew up.  .Of course, they were called 'aviatrixes' then, so that was what I wrote on.  I wanted to be one of those!"

After the family moved to Marible, Missouri, Doris and her sister, Bernice, entered college.  Doris signed up as the second girl on the list for CPT (Civilian Pilot Training).   Since they could only sign up one girl for every nine boys, she had to wait to enter the training program.  While she waited, she went to the air field and watched the students as they flew and sat in on  the ground school classes.  Eventually the instructor let her complete the training course.  Doris was delighted that her first passenger,  after she earned her license,  was her dad!

When Doris learned about the WASP training program, she applied and was immediately accepted into class 43-4;  however,  she had to wait a few weeks, because she went home 'to break the news' to her mom and dad.

Doris took the train to Avenger Field in Sweetwater, Texas.   When she arrived, she joined 123 other young women pilots as a member of class 43-5.  After completing   the  nearly 7 months of training, 85 members of her class  had earned their wings, so they graduated and became WASP.  After graduation, Doris served briefly at Love Field, Dallas, Texas.  She was then transferred to Lockbourne Air Force Base in Columbus, Ohio, but was soon transferred to Columbus Army Air Base in Columbus, Mississippi.   There she flew engineering flight tests in AT-10's.  Her last station was at Casper, Wyoming, where she flew as co-pilot on B-24's and administrative flights in the C-45.  She was the only WASP stationed at Casper.

After the WASP were disbanded, Doris moved with her family to La Veta, Colorado to help her family open the ‘Gamble Store.'   Although she had only planned to stay until the store was ‘up and running’,   she met Julian Tracy at a dance and, as she put it, 'we just kept  dancing and dancing.’   They married in 1946 immediately following the Sunday service at the La Veta Baptist Church.

The Tracy's raised their 2 daughters in La Veta.   When they entered school, Doris spent time as a PTA mom.  In addition to making  the candy for the school candy sales ,  she ran both the store and the house,  served on the Board of Directors of the Francisco Fort Museum,   and was active in the Eastern Star. Any excess time she ever had, she spent enjoying her hobby--combing the nearby Colorado  hills for arrowheads and artifacts,


In September of 2000, Doris was kind enough to welcome Wings Across America into her home in La Veta.  She was absolutely delightful.  Her love for her family and Colorado was heartwarming.  Doris was a warm, trusting, caring lady, who loved to search the land around her.   She knew there was always another treasure just over the next hill.

On March 10, 2010, Doris was in attendance at the US Capitol in Washington, DC, as the WASP were awarded the Congressional Gold Medal.  The smile on her face was priceless.  So many years later, to be honored and thanked by the country she had served -- her joy just spilled out.

Our most heartfelt prayers for her family and those who loved her.  She was another 'one-of-a-kind' who touched our hearts.  Knowing her was a joy and an honor.

Doris is preceded in death by her parents, husband and sister Bernice Hayes.

Cremation was chosen and a Graveside Service will be held 2:00 P.M. Tuesday, August 3, 2010 at the La Veta Cemetery in La Veta, CO.  In lieu of flowers, contributions are suggested to the WASP Memorial in La Veta in her memory, and may be made through the funeral home office.

Rogers Family Mortuary of Alamosa is in care of the arrangements.

Posted by Wings Across America buglegirl at 4:00 PM