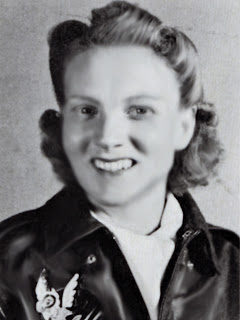 Bethel was  born on July 2, 1921, the third of 11 children.  The Haven family worked a seed farm in Santa Ana, California, with brothers and sisters helping with the chores and enjoying the beautiful countryside of Orange County.

Bethel's love of flying was sparked at age nineteen, when she signed up for aviation classes at Santa Ana College while her fiance was stationed at Santa Ana Army Air Base.  Shortly after learning to fly,  she married Tom Gibbons.

After Tom was shipped off to war,  Bethel  kept flying, and eventually learned about the WASP 'experimental flying training program' from a telegram she received from the Army Air Forces.

She then applied  for the program  and was accepted into the class of 43-6, paying her way to Avenger Field, Sweetwater, Texas.  She entered training with 121 other patriotic young women pilots.  When she graduated on October 9, 1943,   83 of her classmates  had also  earned their wings and graduated with her.

After graduation,  she was stationed at Love Field in Dallas, Texas,  as a ferry pilot.  She had the opportunity to fly the Ryan, Piper Cub, Taylorcraft, PT-19, PT-17, BT-13, UC-78, AT-6, PQ-6, PQ-12, and A-24.  She took additional instrument training at  Sweetwater and was reassigned to Clovis Army Air Field, New Mexico.

After the WASP were deactivated, Bethel flew for an Oregon firm,  ferrying red-lined aircraft.

Once her husband returned from overseas, she gave up flying and  became the mother of 3 children (3 boys and one girl).  She  spent many hours volunteering for Cub Scouts, PTA and her church.
Later, Bethel worked as a legal secretary for 22 years, retiring in 1984, at which time she became an active volunteer in the Santa Ana Ebell women's group.

Like so many of these unique women pilots,  after the WASP were disbanded, Bethel  returned to civilian life, became a wife and a mother and was always proud of her service as a WASP.   When asked,  she generously shared her experiences with children and church groups.

When Congress granted the WASP  veteran's status in 1978,  she received an honorable discharge from the Army Air Forces.  In 2001, Bethel Gibbons was inducted into the Santa Ana College Hall of Fame.   On  March 10, 2010, together with her WASP peers,  Bethel was awarded the Congressional Gold Medal,  the highest honor the Congress of the United States can award  to  a civilian.
On May 8, 2010, she was honored by the Katuktu Chapter of the Toastmaster's and on June 15, 2010 Bethel was the subject of a feature article in the Orange County Register.

In researching information on Bethel, I found a message which I believe captures the heart of this wonderful WASP.
The following was posted on the Orange County Register website on June 16, 2010:


"Many years ago, when I was just 19, I worked in a law office with Beth. She must have been around 43 at the time. She was an inspiration even then. To think she had been a WASP and a pilot was amazing to me..even in the 60's. But more than that, she was a very lovely and gracious woman. And very kind to a very inexperienced young girl."

God bless all of those who lives she touched and to her family, our heartfelt prayers.