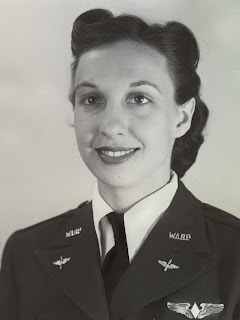 Never having the opportunity to interview Mary, I  respectfully submit the following few bits and pieces of information put together from different resources.

Mary Louise Burch Nirmaier was born Dec. 12, 1920 in Valley Mills, a small town in the heart of Texas,   where many of her family still live.

Mary's earliest recollections of airplanes were of her entire family running outside every time they heard an airplane overhead.  She grew up in Valley Mills, Texas and graduated from high school in 1938.  She then moved to Washington D.C.

As America began preparing for World War II, both of her brothers joined the Army Air Forces and served their country. Her brother Kenny was a navigator in a B-17 and her brother Wilbur was an  engineer on a B-24.

Mary wanted to contribute.  She learned of a small airport in Virginia that was giving women the opportunity to learn to fly, so  she paid her own way to take the 70-mile trip on the ‘milk train’ every Sunday morning.  She learned to fly on a rolling pasture in Virginia in a Piper Cub airplane.

After joining an airplane club and accumulating the required number of hours of flying time,   Mary applied to enter the Army Air Forces flight training program for women.  After meeting the  requirements and having a personal interview with one of Ms. Jacqueline Cochran’s staff,  she was accepted for training.

In November of 1944,  Mary traveled to Avenger Field in Sweetwater, Texas and entered the  program.    On June 27, 1944, after  7 months of flight training,   she earned her silver WASP wings, graduated as a member of Class 44-5, and became a WASP (Women Airforce Service Pilots).

Her Army Air Force orders sent her to Douglas AFB,  Arizona, where she flew as an engineering test pilot.  In addition, she flew both utility and administrative flights.

While stationed at Douglas, Mary checked out  in the B-25 Mitchell bomber as a first pilot by the Air Force pilot who had flown the B-25 off the deck of the carrier in the movie "Thirty seconds over Tokyo."    In August, she married Lt. Clayton Nirmaier, who was also stationed at Douglas.

Mary flew her last flight as a WASP in a B-25 bomber and fondly remembered  flying the 100 mile Arizona valley between towering 12 thousand foot mountains on either side, listening to big-band music.  On December 20, 1944,  the WASP were disbanded.

In 1947 Mary joined the Air Force Reserves and served for the next 20 years.   During that time she also served as Press Secretary for U.S. Rep. John Breckinridge of Kentucky and worked for both the United Press International and the St. Louis Globe-Democrat.  She later worked at Harvard Business School and Rockefeller Institute for University Presidents.

Mary was the proud mother of four children and earned a BA in journalism (1955) and an MA in communications research (1971) from the University of Missouri.

On March 10, 2010, Capt. USAFR (Ret),  WASP Mary Nirmair attended the ceremony in Washington, DC to award the  WASP the Congressional Gold Medal.  She sat on the second row, proudly wearing her Air Force uniform and her WASP wings as she and over 175 of her fellow WASP who were present, and the other WASP who were not present,   were awarded the Congressional Gold Medal, the highest honor Congress can bestow on a civilian.    The next day,  she was welcomed home at Columbia Regional Airport by a crowd of cheering and applauding "Salute to Veterans" volunteers.

Mary  always wore her uniform to all military functions near her home in Columbia, MO.   She was proud to be both a retired Air Force Reservist and a WASP.  She was also proud of both of her brothers,  Sgt. Wilbur V Burch & Lt. Col. Kenneth Burch,  who served during both WWII & the Korean War.    A very patriotic family!  Amerian flags fly proudly over the family ranch.

More information will be added as it is available.

V/R posted by Nancy Parrish
Complied from  THE MIZZOU ALUMNI ASSOCIATION, FALL, 2010; The Columbia Tribune; The Missourian; the Waco Tribune Herald and Mary's facebook page.
Aug. 30, 2010
Posted by Wings Across America buglegirl at 10:18 AM