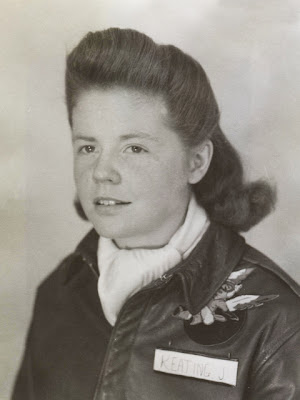 Josephine (Jo) Swift passed away on Saturday, August 28, 2010,  less than a month before her ninety-first birthday.  She will be missed, and she will be remembered with joy,  for she was a gift to all who knew her -- a WASP with a shining spirit that touched so many lives, including mine.
_____

Jo was born in Great Falls, Montana on September 24, 1919.  She called Great Falls "a hotbed of stunt fliers, crop dusters, barnstormers and flight schools”.  She and her brother paid $2 and took a ride in an airplane that changed their lives.  (Jo later said it may have been the goggles and scarves.)

After  successfully soloing and flying enough hours to get her pilot’s license,  Jo  then completed the required minimum of 35 hours and applied for, and was accepted into,  the WASP’ flying training program as a member of class 44-W-1.  After completing 7 months of training, she, along with 48 other young women pilots, graduated,   received their silver wings, and became WASP!     Class 44-1 was the first class to wear the Santiago Blue WASP dress uniform!   They also wore gloves at their graduation.  Jo’s graduation day was one of the coldest February's in West Texas history!

After graduation, Jo was sent to Dodge City, Kansas to the Army Air Base to learn to fly the B-26 Martin Marauder.  After successfully completing the transition training, she was stationed at  Pueblo Army Air Base, Colorado, a combat training base.  There, she flew both the B-26 & UC-78.  She ferried cargo,  personnel,  and aircraft; towed targets,  and flew simulated dive-bombing runs at B-24's.

After the WASP were deactivated, Jo applied to several airline companies for a job. They were not hiring female pilots.   Without success, she returned to Billings, Montana, where she was an instructor, flew,  and typed her way to her next job: wife and mother.

Jo married a ‘bush’ pilot from Alaska named Ken Swift.  She and Ken had three children.  When Ken passed away, Jo worked six years doing market research at Boeing.  She then opened an IFG Leasing Company in Anchorage, Alaska.

Eventually, Jo returned to Seattle,  later moving to Port Townsend, to be closer to her family.

Jo is survived by her three children, many grandchildren and great-grandchildren.
(There is no  information available regarding services.)
_______________

The last time I saw Jo was in Washington.  She was smiling from the inside out, wearing her WASP beret as only she could--just a little taller than most!

Jo had come to DC to attend the Congressional Gold Medal Ceremony.   I was looking forward to seeing her, because, just a few months before, she had called my cell at just the right moment.   I was waiting in Sen. Hutchison's hallway between meetings regarding the Bill to award the WASP the Congressional Gold Medal.   I had never met or talked to Jo before, but  I was thrilled to be able to tell her first-hand  'what was happening'  in Washington.  I could hear her smiling!

Although I didn't get to spend much time with her at the ceremony, I was honored to know her.  Her sparkling spirit was contagious.  Perhaps this article says it better than I ever could:   http://www.northwestmilitary.com

A very special moment happened after the ceremony was over, on the steps of the Capitol, when Jo's escort, Tech Sgt. Heather Normand, presented Jo her replica Gold Medal in front of 17 members of her family!