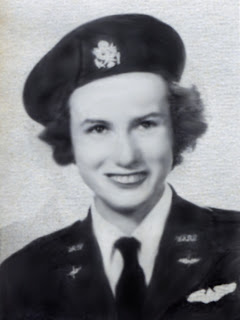 Justine Fletcher Woods, better known as “Fletchie”, passed away in her sleep at home in Honolulu, Hawaii on May 26.   She spent her life with her best friend and husband of 62 years, Ransom (Bud) B. Woods, Jr., traveling around the world together courtesy of the United States Air Force.

Justine was a Congressional Gold Medal recipient for her service as a Woman Airforce Service Pilot (WASP) during WWII. Of the 25,000 women who applied for this newly developed women's service program, she was one of only 1,074 who graduated.  She flew for the Army Air Force during the last year of the war flying twin-engine UC-78s and AT-6s military planes as a test pilot and training cadets.  The program was disbanded by the end of 1944 and not until 1977 were the women finally given military recognition. In March of 2010 the WASP were awarded the Congressional Gold Medal as the first women in history to fly American military aircraft.

With the disbanding of the W.A.S.P., Justine joined the American Red Cross to drive a 2-ton truck, the Clubmobile, through war-torn Europe taking coffee and donuts to the boys in the fields. This began a long association as a Red Cross volunteer.

Throughout her life she continued to volunteer through the Red Cross as a swimming and a sailing instructor. Born and raised in Brooklyn, New York, Justine was always the tomboy and sport enthusiast, playing golf, tennis, sailing and swimming. She took much pride in her role as a water safety instructor and used this avenue to teach swimming for nearly 50 years with the Red Cross. Justine was also a Red Cross sailing instructor with a group of women called the “Wet Hens” teaching sailing to other military wives while stationed in Hawaii.

Justine received her B.A. from Wells College in Ithaca, New York in 1939 and M.A in education from University of Southern California. She also earned her private and commercial pilots licenses.

Justine married “Bud” right after World War II ended and traveled 30 years with the US Air Force. They moved every three years to new assignments throughout the US and the world. In 1975, upon “Bud's” retirement from the Air Force, they enjoyed life between homes on Waikiki Beach in Hawaii, Sun City West, AZ, and Aspen, Colorado, where they had great pleasure snow skiing, golfing, and playing bridge with wonderful friends.

A memorial service will be forthcoming at the Snowmass Chapel in Snowmass Village, Colorado at a time to be determined.

Reposted from the Glenwood Springs Post Independent
Links and photo respectfully added by Nancy Parrish
Posted by Wings Across America buglegirl at 10:18 AM