When asked, other than your family, what is the one thing are you most proud of,   Sylvia Clayton answered,

"Being a WASP and winning my wings." 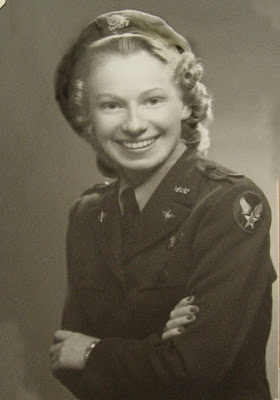 On November 12, 2011, WASP Sylvia Dahmes Clayton took her final flight,  flying higher than she had ever flown before where, "earthy limitations will hinder her no more."

Sylvia was born January 20, 1920 in Redwood Falls, Minnesota,  to Freida Otto and Robert Oliver Dahmes.     Shortly before her birth,  the family purchased a 160 acre farm.  Sylvia and her older brother and younger sister grew up learning how to feed the chickens, pick apples,  weed the garden,  and play in the grain as the threshers moved through the wheat fields.

Sylvia began elementary school in a one room country school house, where grades one thru eight were taught at the same time.  The outhouse was in the back, and school lunch was at their desks, with whatever they brought in their lunch pails.   To get to school during the frigid Minnesota winters, her dad would hitch up two horses behind a 'cutter' sled,  and her mom would heat bricks and wrap them up for the bottom of the sled to keep the children's feet from freezing.

In 1937, when Sylvia was a junior in high school, her father died, leaving her mother to fulfill his promise that all three of their children would finish college.  Sylvia graduated as high school valedictorian and began her first year of college at the NW Institute of Medical Technology.  After her freshman year,  during the summer, her brother was invited to join the CPT (Civilian Pilot Training) program at his college. He convinced his sister she needed to learn to fly as the one girl allowed to sign up for the program.  After transferring her credits to be closer to home, she applied for the program, passed the physical,  and began learning to fly.   Her first solo was on a little grass field with cattle running on it. Her  instructor told her,  "If you can't miss the cattle, you have no business being a pilot."

After earning her BA from Western Union College in Ames, Iowa in 1942, Sylvia began working as a medical technician at Harper Hospital in Detroit, Michigan.  She continued to build up her flying hours and, eventually, joined the Civil Air Patrol. It was then she learned about the WASP program. 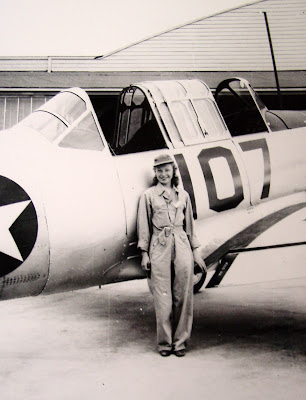 She applied,  was accepted into the class of 43-5,  and ordered to report to Avenger Field, Texas on March 23 at her own expense.    After successfully completing the training program, Sylvia graduated, earning her silver WASP Wings.  She  was then assigned to the 3rd Ferrying Group based at Romulus, Michigan as a ferry pilot.  She was soon selected and was temporarily assigned to attend pursuit school.  After graduating, she returned to Romulus.

After the WASP were disbanded on 20 December 1944,  Sylvia first returned to being a medical technician.   However, she soon decided to  change her career back to aviation.    She was hired by a firm in San Bernardino, went through training to  learn how to tear down a jet engine and rebuild it. Her main job was to  block-test jet engines.  It was there, in 1946, that she met and married Harry H. Clayton,  an engineer at the same firm.  Soon after, they began their family.

Sylvia and her family lived in several different states.  After her husband's  very successful career in the aviation industry, they ended  up in Tucson, Arizona where  he started his own business.  Harry passed away in 2000.

In July of 2011, the personnel of the community where Sylvia lived in Tucson, gave her an extraordinary gift.  They arranged for her to fly again.  After the plane  left the ground, the pilot turned the controls over to Sylvia and allowed her to  fly it for almost an hour.  As reported on the Tucson news that evening, her memorable comment was, "Why is this plane so slow!" 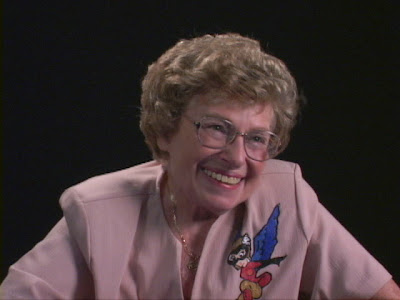 On 3 Nov, 2001,  my mom and I were privileged to interview Sylvia in her home in Tucson.   It was clear that she still missed her husband, who had passed away just a year before, very much,   but when she began to speak about her wonderful family, growing up on the farm,  and flying, she just sparkled, and her kindness and sweet spirit filled the room.

When the interview was winding up, my mom asked her if there was anything she might want to say to those in future generations-- to inspire them--or to her grandchildren or great grandchildren. Sylvia said, " Believe in yourself!    Try to do  what you think you want to do-- and you can do it-- you've got it in you to do it."

Finally, I asked her one last question:
"Do you have a favorite word?"
Sylvia's answer:   "WASP."

From the official obituary :
"The Minnesota farm girl heritage that made her a good WASP imbued her values into to her surviving children, Robert and Sharon and her granddaughter, Emiley. A Tucson resident for more than 50 years, Sylvia was active for most of that time in the Casas Adobes Congregational Church. She made many friends there and at the Fountains, as well. She was active in PEO and American Business Women's Association for many years. As she grew older, life became more difficult. Sylvia was ready to join Harry, her husband and we are saddened that she is gone. We are happy to have been a part of and shared in her remarkable life"

In lieu of flowers, please make donations to Planned Parenthood, The Alzheimer's Foundation or Southern Arizona Association for the Visually Impaired in her name.