“Listening to my father describe a flight he took with a barnstormer at a county fair doing the “loop the loop” made me determined to fly some day.” 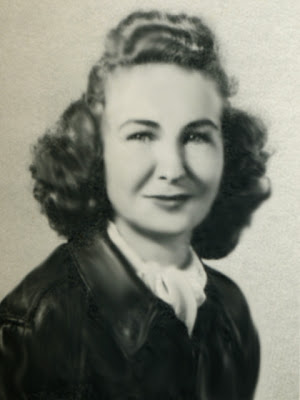 Eleanor Thompson was born on June 5, 1921 in the small North Carolina town of Salisbury, 50 miles southwest of Greensboro.  From her earliest recollection of her dad sharing exciting stories of flying with a barnstormer,  Eleanor was determined to learn to fly.

After graduating from Spencer High School, she attended from Catawba College in Salsbury where she became Chief Cheerleader, was a member of the Writer’s Club and Editor of the College Annual.    While in college, she was able to take advantage of the Civilian Pilot Training offered to students, as the only girl in a class of ten, finally fullfilling her childhood dream to learn to fly.   She graduated with a BS in Business Administration, a Teacher’s Certificate and a Private Pilot License.

After graduation, Eleanor worked as a clerk-typist for the Civil Aeronautics Administration in Washington, DC.  While at the CAA, she received a telegram from Jacqueline Cochran, inviting her to apply for the new military flying raining program for women pilots.  She applied and was accepted into class 43-W-4.

Eleanor paid her way to Sweetwater, Texas.   On Valentine’s Day, 1943, she and one hundred fifty other hopeful young female pilots, reported for training at Avenger Field.  After just five months of training, Eleanor and one hundred and eleven classmates graduated and earned their silver WASP wings. It was the largest WASP graduating class in history.

After graduation, Eleanor was sent to the 5th Ferrying Group at Love Field, Dallas, Texas.  While at Love Field, she qualified as a first pilot for Class III aircraft, which included the larger twin engine C-47’s.  After a year at Love Field, she was transferred to Victorville Army Air Base in Victorville, California,  where she flew AT-11’s as an engineering test pilot.

After the WASP were deactivated,   Eleanor flew war surplus aircraft to new owners. She then accepted a job  as Asst. to the Registrar at Stanford University.  Shortly afterwards, she was given the opportunity to travel and took a job teaching ‘Theory Of Flight’  and ‘Math’ at Escola Technica de Aviacao in Sao Paulo, Brazil,  and English at the State Department School. In 1946, after a courtship that started in a Portugese language class jn Coral Gables, Florida,  she married James Howard Wortz, a fellow instructor.

The young couple returned to the States and settled in California,  where they built a home.  Their family grew to include two sons: Marc Steven and William Howard.

Eleanor ran the training division at Moffett Field, California for six years and earned her MA from San Jose State University.  She taught business at Canada College, Redwood, California until she retired at age sixty-two.

Following her husband’s death in 1990, Eleanor organized the Woodland Vista Swim and Racquet Club in Los Altos and served as the first president.

Eleanor travelled  to Europe, the Middle East, Asia, Africa, Australia and South America.  She was a long-time member of the Los Altos United Methodist Church.

In 2010, Eleanor and her sister WASP were awarded the Congressional Gold Medal, the highest civilian honor Congress can bestow.  Less than a year later, her memoir,  “Fly Gals of World War II”,  was published.

Eleanor died peacefully at her home in Los Altos, California on August 18, 2013 at the age of ninety two.

From her official obituary:

“She will be dearly missed by her loving sons, Marc Steven Wortz of Santa Cruz and William Howard Wortz of Los Gatos, and their wives, Cathy and Fujko, as well as brother Julian Thompsoin of Potomac Falls, Virginia, sister Jean Thompson Barrick of Los Gatos, and many nieces, nephews, and friends.”

God bless the family of this extraordinary WASP and all of those around the world, whose lives she touched.

sources:
“Out of the Blue and Into History” by WASP Betty Turner   p. 85
Official obituary --Legacy.com