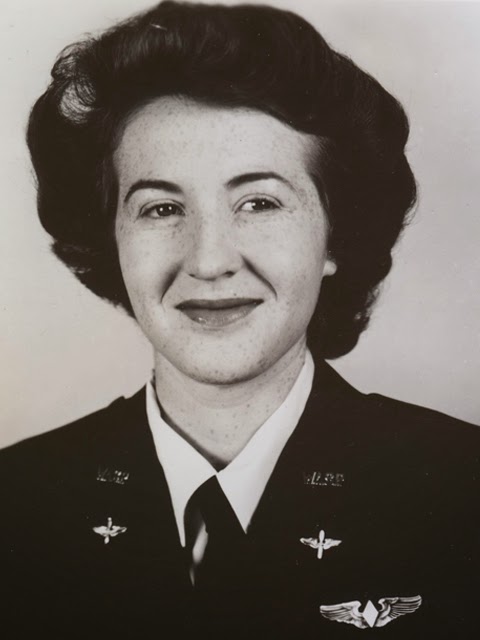 "I thought they were crazy!  I thought I'd never learn all of this.  Going from a PT-17 Stearman that had no instruments and no starter or gears or anything to the AT-6-- it was just mind boggling.  I thought, "What are they doing!"  I LOVED THE AT-6!"  WASP Mary Alice Putnam, 44-W-7

Mary Alice was born a redhead in a West Texas sandstorm to Thomas Rogers and
Eunice (Smart) Putnam in their Lueders home on March 18, 1923. Reared in Lueders, the banker’s daughter daydreamed of movie stardom in news reels and flying machines like Amelia Earhart. Childhood summers at the
Putnam Ranch in Throckmorton County and at Eagle Nest, New Mexico, kindled her love of nature and travel.   In high school she played basketball, the trombone, jitter-bugged at Buttermilk Tavern in Anson, and took flying lessons from a crop duster at Stamford, TX.

Graduating from Lueders High School in 1940, Mary attended SMU and 'earned her wings'  in college at a Love Field flight school in Dallas. She graduated from Texas State College for Women in Denton (now TWU), with BA in Speech and Theater—and high hopes of Broadway or the silver screen.

During WWII a Life Magazine cover story about the Women Airforce Service Pilots training at Sweetwater sent Tom Putnam and his daughter to Avenger Field to interview with Jacqueline Cochran, famed pilot and WASP Director.  Cochran waved the 21 age restriction for Mary, one month short, and Mary joined the class of 44-W-7.

After graduation, Mary was stationed at Eagle Pass Army Air Field and Moore Field on the Texas-Mexico Border, where she ferried planes and towed gunnery targets, until December 20, 1944, when WASP were disbanded by a thank you letter from General Hap Arnold, U.S. Army Air Force.  WASP  hitch-hiked and paid their own way home. Their records were sealed and unavailable to historians until the Freedom of Information Act Amendments of 1996. By then half the fly-girls were deceased.   WASP received  military status by Congressional Act in 1977 and a Congressional Gold Medal on March 10, 2010 in Washington DC.

After the war ended, Mary traveled across California with sister Maurese Vinson
and taught briefly at Lueders before acceptance to The American Academy of Dramatic Arts in New York City in the spring of  1946. Off to the Big Apple during the hey-day of Broadway Musicals–South Pacific, Guys & Dolls, and George Gershwin’s Porgy &
Bess.   She returned to Texas and joined American Airlines in Dallas 1948-52.  No, not as a pilot. Women were still prohibited from piloting commercial aircraft. Disappointed, Mary declined being a “a glorified waitress on a flying’ bus” and was a reservationist rooming with two “stews” in Dallas.

In 1951 she married Bob Vandeventer of WBAP radio in Dallas. An ABC Radio newsman during the war with Paul Harvey in St. Louis, Bob became News Director for WFAA-TV, the first television in Dallas. They had two daughters, Teresa and Sheri.

In 1965 Mary returned to Lueders with her tween girls and updated teaching credentials at Abilene colleges. She taught 6th through 8th grade English and History, coached Jr. High Basketball, and settled on 5th Grade, before she taught High School Drama for UIL Competition. Her theater students went to State one year. In 1979 she was recognized as
the Memorable Teacher and retired in 1983 to serve on school board several years.

Mary reconnected with fly-girl pals at WASP Reunions and global tours—she explored Africa and traveled five continents—and told the WASP story as an advisory board member of the National WWII WASP Museum at Sweetwater. She served as “the local WASP.”

In 2010 the City of Lueders changed her address to Vandeventer Street in honor of her Congressional Medal.  Locally, Mary was Secretary of the American Legion Post in Lueders for many years, and was a lifetime member of the National WASP WWII Museum in Sweetwater.   She was active in her church, Methodist Northwest Council, and lived independently in the home where she was born until November 2013. She deeply loved numerous cats and one dog that didn’t “talk back”.

In lieu of flowers, donations may be made to the National WASP WWII Museum, 210 Avenger Field Rd, PO Box 456, Sweetwater, TX 79556 or online at waspmuseum.org.

I first met Mary in September, 2000, when she graciously welcomed us into her home in Lueders, Texas.   We were so honored to record her story in the home where she was born.  100 percent Texas lady with gentle, low voice and an easy laugh.  Her journey from a small West Texas town to become a WASP and eventually study at the National Academy of Dramatic Art was inspiring.

I can only imagine how blessed the young students in Lueders were, when she returned to her hometown and shared her world of experiences with them.

Posted by Wings Across America buglegirl at 2:12 PM